My threats against Zarif and Salehi were serious: MP 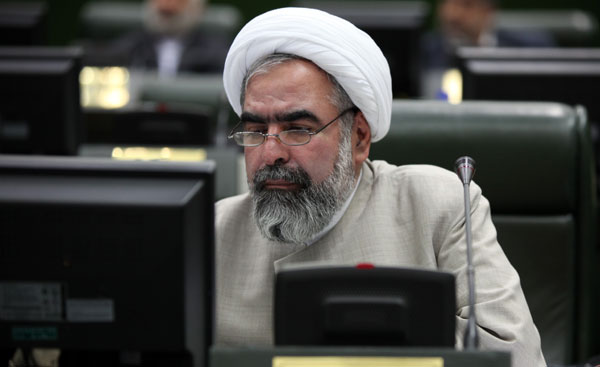 Although we do not seek to develop a nuclear bomb, by JCPOA we gave away a psychological advantage, Hosseinian said.

Tehran MP Ruhollah Hosseinian told reporters on Tuesday that he does not have a guilty conscience for what he told Director of the Atomic Energy Organization of Iran (AEOI) Ali Akbar Salehi, adding that he was completely serious in what he said.

The principlist deputy who threatened the nuclear chief in a boisterous parliament session on October 11 which ended in the passage of the general outlines of the Joint Comprehensive Plan of Action (JCPOA) elaborated on his remarks in a press conference.

The following is the translation of a part of what Entekhab.ir quoted him as telling reporters on October 13 after being released from hospital:

On what he told Foreign Minister Mohammad Javad Zarif and Salehi, Hosseinian said, “After the release of the Lausanne statement, when Mr. Zarif attended a parliamentary committee session, I criticized him and told him that he had given psychological ammunition to the enemy.

Although, we do not seek to develop a nuclear bomb, the enemy was under the impression that the Islamic Republic had the capability to do so.”

Hosseinian went on to say, “I told him that the Zionist regime of Israel would threaten us with nuclear bombs on a daily basis after Iran was stripped of such a tool. In fact, a few days later, the former Israeli defense minister threated to bomb Iran with nukes.

Once again, I reminded Mr. Zarif that if the Zionist regime attacked Iran or if the US launched a strike against Iran because of JCPOA, people would arrest you and put you on trial. I also told Mr. Salehi that [at that time] if I were in charge, I would make him dig out cement from the core of the Arak Reactor, throw him inside and encircle him with cement. I did not say that I would pour cement on him, I said I would encircle him with it.”

On the approval of the general outlines of JCPOA and its impact, he said, “God willing, the good promises by President Rouhani will come true and all economic woes of the country will go away, inflation will disappear, we will leave behind recession and we will have a country which will be overflowing with welfare; I say prayers for that day to come.”

He added, “I told Zarif and Salehi that I hope my prediction about JCPOA won’t come true, but if it does happen, I will treat them the very same way I told them I would.”