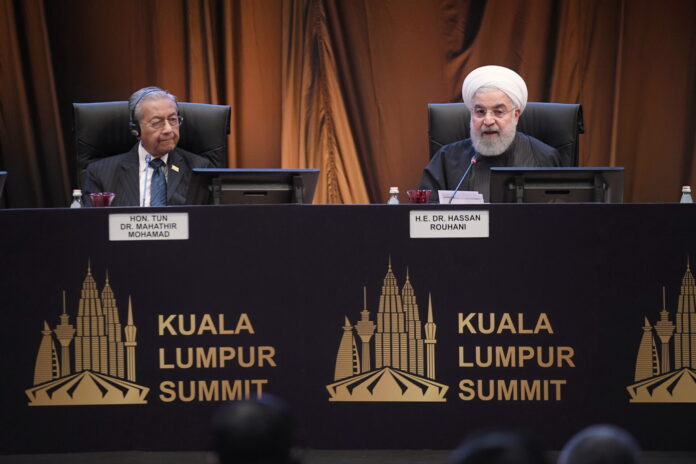 Iranian President Hassan Rouhani says Muslims must stand in solidarity against the enemies of Islam and use the capacities of the Muslim world to achieve their goal.

He made the remarks during the Round Table Session of the Priority of Development and the Challenges held in the Malaysian capital Kuala Lumpur Thursday afternoon. The Prime Minister of Malaysia Mahathir bin Mohamad and the President of Turkey Recep Tayyip Erdogan also attended the meeting.

In his speech, Rouhani thanked the Malaysian Prime Minister for holding the Kuala Lumpur Summit, saying that “There were some very important points raised in this summit that can unite and empower the Muslim countries.”

Rouhani emphasized that the Muslim world has many capacities but we do not make good use of this capacity.

“Unfortunately, we are witnessing religious differences [among Muslims] that should not be so. There should be no division among Muslims under the umbrella of monotheism.”

Rouhani further noted that there are many summits in the Muslim world for solidarity and dispute resolution, and it is not expected that all problems will be resolved in one sitting. “However, these summits must force the participating states to look for solutions to the problems.”

“If we can solve some of the problems, then there is a great opportunity for us to take an important step to co-operate. Using the capacity of the Muslim world we must stop the enemies who seek to prevent the Muslims from reaching their goals.”

The president also emphasised that with the awareness of the younger generation and with the greater knowledge it is possible to achieve this goal. “We must develop science and technology in Muslim countries, and increase our awareness of the past and trust what our predecessors have left for us. We should have hopes that victory is near.”

Rouhani had earlier attended Kuala Lumpur Summit 2019 in the Malaysian capital on Thursday morning. A number of Muslim world leaders including those of Malaysia, Turkey, and Qatar, as well as hundreds of elite figures, had taken part in the event.