‘Mother of All Bombs’ Both Hailed, Condemned in Afghanistan 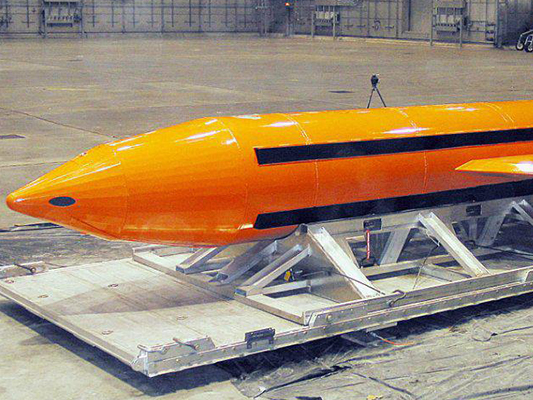 The US military’s attack on ISIS targets in Afghanistan using the largest non-nuclear weapon ever used in combat has been both hailed as a successful attack, and condemned as a brutal and inhuman misuse of Afghanistan as a testing ground.

Afghanistan officials said Friday that the attack on a tunnel complex in remote eastern parts of the country with the largest non-nuclear weapon ever used in combat by the US military left 36 ISIS fighters dead and no civilian casualties.

The Ministry of Defense said in a statement that several ISIS-Khorasan caves and ammunition caches were destroyed by the giant bomb, which terrified villagers on both sides of the Afghanistan-Pakistan border with its “earsplitting blast.”

The U.S. military headquarters in Kabul said the bomb was dropped at about 7:30 p.m. local time Thursday on a tunnel complex in Nangarhar province, where the Afghan affiliate of the ISIS group has been operating. The target was close to the Pakistani border.

“I want a hundred times more bombings on this group,” said Hakim Khan, 50, a resident of Achin district, the site of the blast, according to Washington Examiner.

However, former president of Afghanistan Hamid Karzai ‘vehemently and in strongest words’ condemned the dropping of the latest weapon, the largest non-nuclear bomb, on Afghanistan by the US military.

In a series of tweets shortly after the bombing, Karzai said, “This is not the war on terror, but the inhuman and most brutal misuse of our country as a testing ground for new and dangerous weapons.”

The bomb, known officially as a GBU-43/B, or Massive Ordnance Air Blast weapon, weighs 21,600 pounds [nearly 10 tonnes] and unleashes 11 tons of explosives. When it was made in 2003 as a deterrent to Saddam Hussein, it was nicknamed the “Mother of All Bombs.” This was its first use in combat.

Other observers have also questioned the necessity of deploying a weapon of that scale against a group whose estimated 600 to 800 fighters pose only a limited threat to the Afghan state.

“There is no doubt that ISIS are brutal and that they have committed atrocities against our people. But I don’t see why the bomb was dropped,” said the mayor of Achin, Naweed Shinwari. “It terrorised our people. My relatives thought the end of the world had come. Every day fighter jets, helicopters and drones are in the area.”

The US had sustained an air campaign to eradicate ISIS in eastern Afghanistan for more than a year, and according to Borhan Osman, an ISIS expert with the Afghanistan Analysts Network, it had already been effective, The Guardian reported.

“ISIS was on the brink of losing their stronghold. It didn’t seem like there was a need for such a dramatic military measure,” he said.