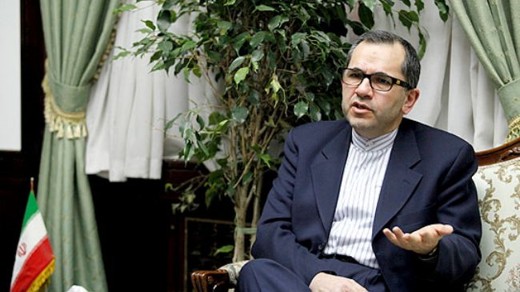 A top Iranian official says it is a far-fetched idea that Tehran and Washington will get engaged in a military conflict.

In a Farsi interview with the Vaghaye Ettefaqieh daily newspaper, Majid Takht-e-Ravanchi, Iran’s deputy foreign minister for European and American affairs, has talked about the ongoing tension between Tehran and Washington.

Excerpts from his remarks are as follows:

It is too early to judge Trump. Not only Iran, but the Europeans and East Asian countries have the same opinion as well, and the reasons for such an idea is quite clear. For one thing, Trump has no political background. He was more of a businessman, and has now become President. It remains to be seen what approach he will adopt in the political arena.

As for whether or not Trump is a threat to Iran, we don’t look at the issue that way. The reality is that we have seen numerous cases [of threats] over the past 38 years. Our people will not only refuse to back down, but will become more determined. Another point is that there have been few changes in policies adopted by either Democratic or Republican US administrations on Iran since the [1979 Islamic] Revolution [of Iran]. Of course, some US presidents might have focused on certain areas more than others.

Some bring up the issue of Obama, arguing that he had that sort of view toward Iran given the Joint Comprehensive Plan of Action (the nuclear deal signed between Iran and the P5+1 group on Tehran’s nuclear program). However, one shouldn’t forget that the toughest sanctions were imposed on Iran during the presidency of Obama.

All in all, one shouldn’t think that a president comes to power in the US whose approach is so much different from that of another, or that one approach is in our interest and the other is to our detriment. The difference between their approaches is minimal.

Zionists, anti-Iran lobbies and certain regional countries seek to cash in on the situation which has emerged after Trump’s coming to power in order to blow the tension between Iran and the US out of all proportion. Efforts are underway to achieve that end. Still, Iran and the United States are highly unlikely to get engaged in a military conflict. The key reason for that is that Americans are well aware of our military capabilities. Iran enjoys special potential in the military domain. They have witnessed [Iran’s potentialities during] the more than eight years of war [with Iraq] and the 30 years during which Iran was under sanctions. Given that, Americans have come to the conclusion that if they take any hasty and irrational action against Iran, it will have consequences for them. They don’t make decisions on impulse. To put it in a nutshell, our potentials and capabilities suggest that it is a far-fetched idea that Iran and the US will get involved in a military confrontation.