In Iran October 8th is celebrated as Children’s Day. Salamat (Health), a weekly newspaper that covers health news, has partly dedicated its 491st issue to children and ways of protecting them, both physically and mentally. It has featured a segment titled “Two hours of chit-chat, joking and laughing to mark Children’s Day”. The following is the translation of four articles that appeared in the latest issue of the weekly:

In the first article, Touraj Shamshiri Nezam, a psychiatrist and couple therapist, has described mothers as the first line of defense against sexual abuse of children which he defines as any contact with the child for sexual exploitation, a contact the child is unable to fathom and or is unprepared for, physically or sexually, one which is not consistent with the rules and social norms.

Unfortunately, sexual abuse of children is on the rise around the world. In almost 90 percent of cases the predator knows the child because they are family, relatives, or neighbors. Total strangers are to blame for only 1 percent of such horrible acts. The following can help parents prevent such abuse from happening:

1. Mothers are the first line of defense. In 10 percent of cases involving child abuse, fathers, brothers and even older sisters are to blame. But mothers are rarely implicated in such acts, unless they suffer from certain psychiatric disorders.

2. In other countries, girls are more vulnerable to sexual molestation which usually comes in the form of groping. Although, in Iran there have been no field studies, girls and boys are equally at risk.

3. Any psychological change in children including seclusion, bedwetting, loss of appetite, nightmares, walking difficulty, abnormally high levels of knowledge about sexual issues, and unwillingness to come face to face with adults should sound the alarm bells.

5. Children should be taught that no one can touch their private parts other than doctors, and that can only happen in the presence of their parents. Children should also be taught to report any attempt by others to molest them to their parents without hesitation, if and when it happens. They should be able to tell good contact from suspicious and bad contact. Contacts other than a brief hug, stroking the hair, a kiss on the forehead, and a pat on the shoulder should be viewed cautiously […].

6. Parents need to teach the following six rules to their children:

A. Children must report any change in their routine, like accompanying someone or receiving something from someone, to their parents.

B. They should be at all times accompanied by a parent, a friend or an elder sibling.

C. The children’s bodies are private and they have the right to prevent others from touching them.

D. They should report any suspicious behavior or movement to their parents without any hesitation.

E. They should not stay with adults, for a long time, in places which are not public.

F. Preferably, they should not go to their friend’s or neighbor’s for play, particularly if their parents cannot keep a constant eye on what they do. 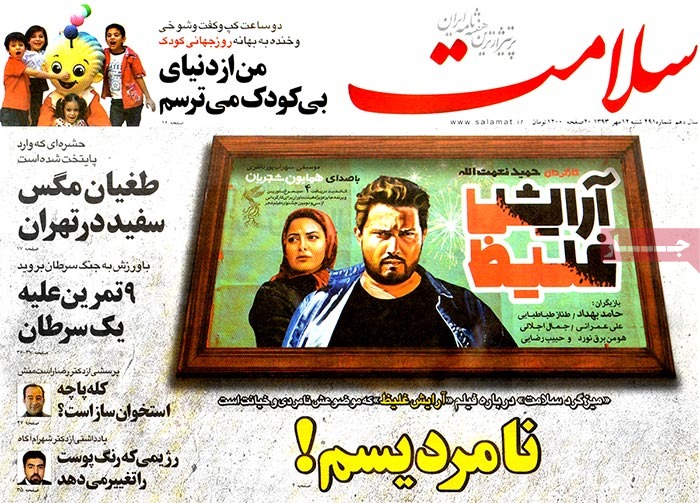 A pioneering move by an Iranian director

Hush! Girls Don’t Scream was the most popular movie screened in the 31st edition of Fajr Film Festival. It was an unforgettable chapter in the career of its director Pouran Derakhshandeh and proved her bravery in focusing on such a sensitive and inflammatory subject.

How to bring up our children in this day and age

Dr. Mitra Hakim Shoushtari, a member of faculty at Iran University of Medical Sciences, has taken a look at the impact of TV programs on children and on their upbringing:

Certainly, children’s TV programs do impact their upbringing, but how parents behave outweighs such programs. As parents, we need to teach our children life skills. The TV programs which are aimed at children these days are different from those of the past, because the children’s world and their tastes have undergone change.

Unfortunately, the point is that most parents view TV sets as an alternative parent for their children and allow them to be glued to them for hours on end. If parents spend more time with their children, they won’t have to be worried about the potential harm watching TV programs can cause to their children.

Some parents are worried that their children may learn inappropriate words from their favorite TV programs. If you are among such parents, you need to change your reactions. Don’t smile when your child blurts out an impolite word. Tell your child that their utterance has irritated you.

We need to make more time for our children and keep company with them. Certainly our friendship with them will have positive results which could be felt in their later years.

Mehdi Faghih, a veteran actor whose career spans decades, says the problem with children’s TV programs today is that those who produce them are not familiar with children and their needs and their productions are light on education. Child experts should be brought on board to enrich children’s programs.

Behrooz Baghaei, an actor who has appeared in many TV programs aimed at children, says animations today are fast-paced and have lost their delicacy of the past. If child experts are reached out to in production of TV programs, great productions will hit the small screen in the future. Children should be familiarized with past concepts and the rich Persian literature.

Shokat Hojat, a veteran voiceover artist whose primary focus has been on children’s cartoons, says in her view old animations were richer in content and would teach more lessons to children. In the 21st century cartoons, love and friendship are conspicuous by their absence.

Unfortunately, during a certain period of time [after the revolution] issues related to love were censored. Love is a pillar of human life. It helps humans evolve. Love is fading away from children’s animations by the day and is being replaced by violence. The concepts children’s programs taught to their audience in the past focused on humanity and friendship.

Alireza Raeesi, an actor who first appeared in children’s programs in the 1980s, says the most important advantage of past animations was that they featured heroes one could learn a lesson in life from. Unfortunately, those heroes are now replaced with robots. Producers should reach out to child psychologists in order to be able to produce items which are richer in content. If the current trend persists, future productions will not only not have anything to offer, but also prevent children from getting familiar with real concepts of life.

Majid Salehi, a comedian who is widely known for his role in children’s programs, says the only thing that stands out about the 21st century animations is that they are exciting. But they don’t teach children a lesson in life. Concepts that may help today’s children become future society builders should be injected into children’s programs. We should not simply think about entertaining children. As adults, we have a responsibility to shoulder and teach them good lessons. In the past, Iran would seldom produce children’s animations; now that we are producing such programs, we need to act more responsibly.