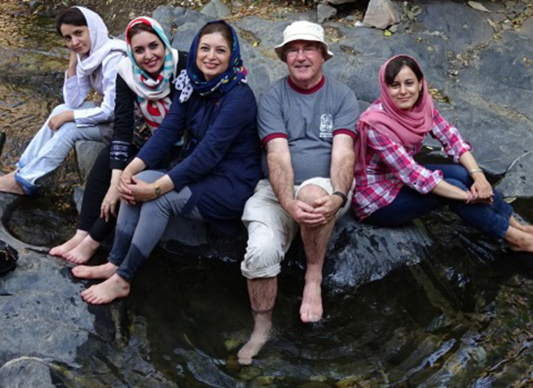 A professor of astronomy from New Zealand has had a two-week trip to Iran and shared his delightful experiences in the country.

John Hearnshaw is Emeritus Professor of Astronomy at the University of Canterbury. He has just returned from a lecture tour in Iran, and has shared his experiences in Stuff website.

Here are excerpts of his remarks, as covered by IRNA:

Many delights and surprises await the western traveller to Iran, the modern-day Persia. I returned from a two-week lecture tour in early September on a journey that took me from Tehran then south to Isfahan, the cultural jewel of Iran. From there I travelled to Saadat Shahr (a small town in the south) and finally to Shiraz and to the nearby ancient ruined city of Persepolis, built by King Darius from about 520 BC but ransacked by Alexander the Great some two centuries later.

History and culture are important in Iran, and an understanding of the various Persian empires stretching back over 2,500 years, including the Qajars throughout the 19th century and the Pahlavis (from 1921 to 1979) and the Islamic Revolution initiated by Ayatollah [Ruhollah] Khomeini in 1979 are important to appreciate this highly sophisticated society.

The first point to note is that Iran is a very safe country to visit; there are no terrorist attacks or muggings, and tourists, though relatively few in number, are everywhere welcomed with a genuine warmth and amazing hospitality.

Shiite Islam is of course the dominant religion in the country […]. All women in public must wear a hijab or scarf […].Travellers to Iran need to be comfortable with this reality before they set out on their travels. 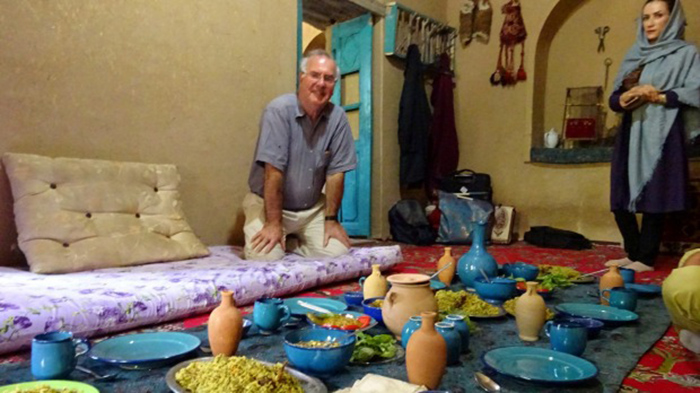 I found Iranians extremely hospitable and charming. They are part of a well-educated society and they are quick to tell you they are not Arabs, in spite of Arab neighbours. Indeed Iran is a surprisingly ethnically uniform country with a long history of Persian culture, in some ways a little like Japan. […]

Another aspect of Persian culture is their universal love of poetry, and with great poets like Hafez, Saadi and Ferdowsi dating back to the middle ages and writing poems about love and wine long before Shakespeare’s time, one can understand why these icons of Persian culture are so revered. I visited the tombs of Hafez and Saadi in Shiraz, and after a lecture at Shiraz University, I was presented with a copy of the Divan of Hafez (he lived 1325-89) containing his poems (fortunately for me with English translations). 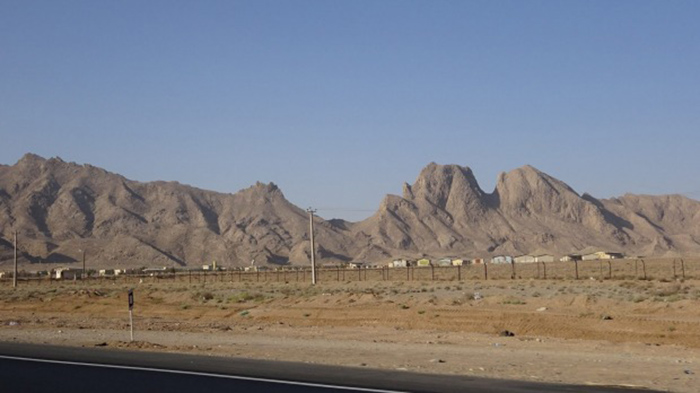 Not all aspects of Iran will necessarily delight the traveller. One is the need to take cash such as US dollars or euros. Thanks to Uncle Sam, western credit cards are not used at all. Another is the traffic in Tehran, where most tourists will enter the country. You are far more likely to be driven than drive yourself, but even that is a hair-raising experience. Road rules seem non-existent except for the principle that he who dares first has priority. It’s no wonder that the death rate on the roads is some three times higher per capita than in New Zealand. […]

I experienced many restaurants in Iran. The food was delicious but not very varied. […] No one will go hungry in a Tehran restaurant; typical dishes would be enough food for several people, and the food wastage was colossal. One discovery was a refreshing yoghurt drink called doogh, made from yoghurt, water, salt and mint. It was the best cold drink available […].

The landscape of central Iran which I visited from Tehran in the north to Shiraz in the south was dry, brown, mountainous, treeless and rather bleak. […] I believe it is the cities which fascinate westerners most, especially Isfahan, Shiraz and Yazd. 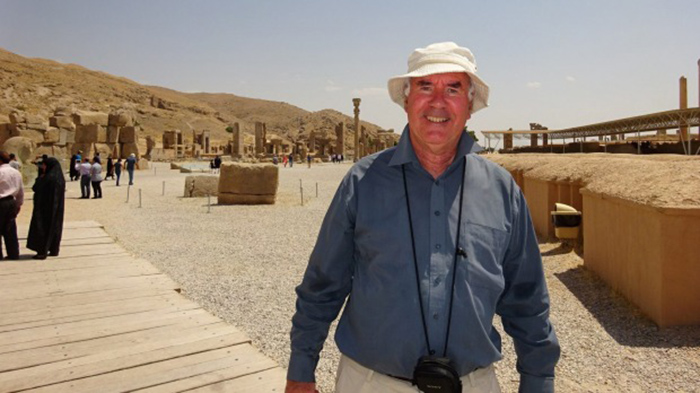 I visited several universities in Iran and gave eight lectures to students and amateur astronomers. This was good fun, and their ability to understand English was impressive. After each lecture I was mobbed by young people who wanted to take a selfie with me, so that invariably took another hour after each talk. I happily obliged. Then there was the present giving. I came home with 40 kg of luggage, half of it being gifts showered on me at each venue, including books, a brass astrolabe, a decorative hand-painted plate, a woven tablecloth and a wool and silk floor rug. […]

Between a hectic schedule of lectures, interviews, restaurants and meeting young astronomers, one other activity I enjoyed was a day of hiking in the Alborz Mountains just north of Tehran. This was a scenic trail up a rugged rocky path high up Mt Daraband above Tehran. The track was popular for Tehranis at the weekend (a Thursday in Islamic Iran) and I enjoyed high mountain air and cooling off with feet in mountain streams, during a day of walking with a group of young Iranian students.