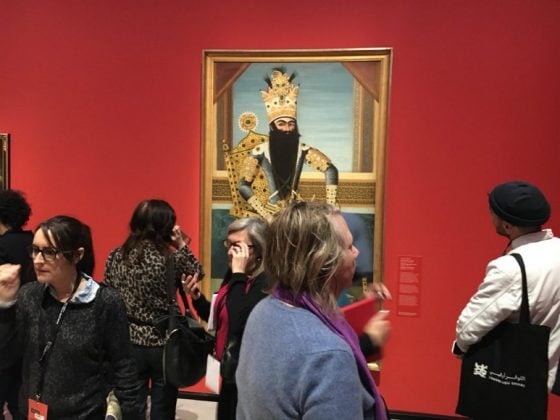 Yannick Lintz, the director of Islamic Art at the Louvre Museum, has hailed the unique features of Persian art during the Qajar era, highlighting the need for conducting further research to rediscover Persian artworks created in the nineteenth century.

The Louvre Museum in Lens recently hosted an exhibition of Qajar art, which attracted over 450,000 visitors. The ‘Empire of Roses’ exhibition started on March 28 and was open to the public for three months.

The exhibition, organized by the Louvre Museum’s Department of Islamic Art, allowed those interested in Persian art to take a close look at a collection of unknown Iranian pieces of art.

Lintz, the director of the Islamic Art department, believes the warm reception of enthusiastic visitors in France indicated the need for conducting new research to rediscover the artworks of Qajar era.

The warm public reception has triggered Louvre officials to plan a similar exhibition of Qajar arts in Paris, the French art specialist said in an exclusive interview with IRNA.

“The Qajar art is not highly known for most French people. That’s why we have decided to put on display a collection of Qajar art pieces kept in the stores of Paris without any written record,” she noted.

She said Qajar art pieces enjoy a unique feature that distinguishes them from others, and people will realize their artistic aspects more in the future.

Lintz also said she is attracted to the similarities between the European art and that of the Qajar era due to her expertise in the 19th century arts.

The exhibition was held in line with a cooperation agreement signed earlier between Louvre Museum and Iran’s Cultural Heritage, Handicrafts and Tourism Organization (ICHTO) during the Iranian President’s visit to France in January 2016.

19 unique art pieces from Golestan Palace including eight oil paintings, a gallery of photos taken by Naser al-Din Shah Qajar who ruled Iran from September 1848 to May 1896, a copper crown owned by Agha Mohammad Khan Qajar (the founder of the Qajar dynasty of Iran, ruling from 1794 to 1797), two historic Qurans with calligraphy, and six scrapbooks by Naser al-Din Shah, Mirza Baba and Mohammad Baqer, Asadollah Shirazi, Esmail Jalayer and Ja’far Khan.