A look at Iranian newspaper front pages on Oct. 21

IFP has taken a look at the front pages of Iranian dailies on Tuesday and picked headlines from 30 of them.

The comments of the Judiciary spokesman about recent acid attacks in Isfahan caught the attention of Iranian dailies on Tuesday. Meetings between Iranian officials including President Rouhani with the visiting Armenian prime minister were also among top stories of the day. Snowfall in a dozen provinces of the country also generated some headlines and put snapshots of snow-covered streets on the front pages of some dailies. Drawing as much attention was news that The New York Times has reported Obama will bypass Congress on Iran’s sanctions if a nuclear deal is reached.

Afarinesh: “As far as foreign policy is concerned, the stage should be set to interact with the rest of the world,” said Chairman of the State Expediency Council Ayatollah Akbar Hashemi Rafsanjani. 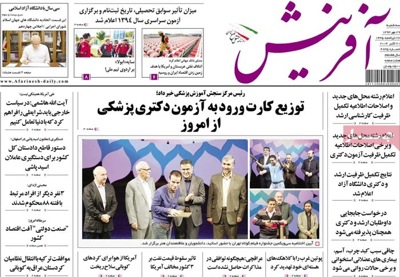 Afkar: “Secretary of the Supreme National Security Council Ali Shamkhani in a meeting with the UN special envoy to Syria has expressed Iran’s readiness for the fight against terrorists.”

Afkar: “We view Iran as a friend and a strategic partner,” said the Algerian ambassador to Tehran. 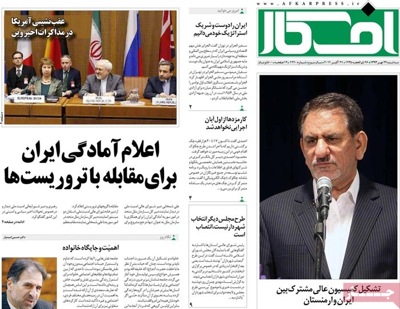 Arman-e Emrooz: “Nuclear talks are more like a math course than a composition class,” an Iranian deputy foreign minister said in a statement aimed at the critics of the government’s handling of nuclear negotiations with P5+1. 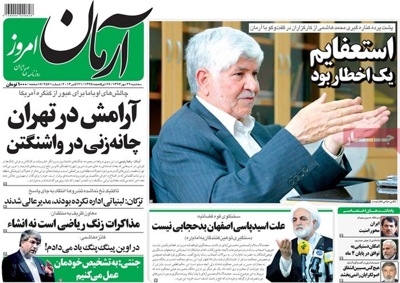 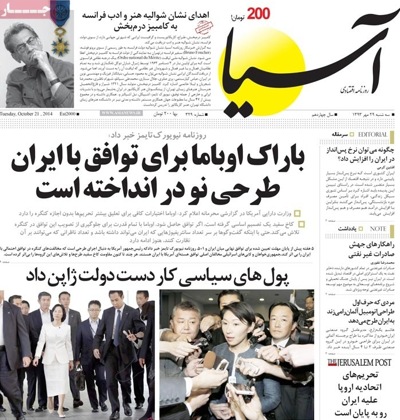 Asr-e Rasaneh: “Some 20,000 checks are bounced daily across the country,” said the secretary general of the Central Bank of Iran. 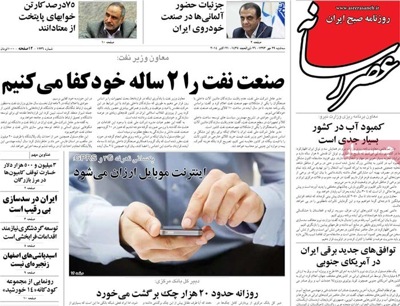 Asrar: “The government won’t cross the boundaries set by the Supreme Leader; it will draw on the views of clerics to devise its plans,” said Vice President for Supervision and Strategic Affairs Mohammad Bagher Nobakht. 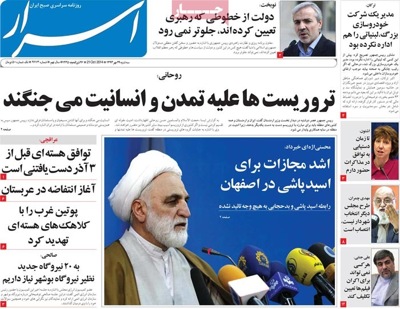 Ebtekar: “US military action and acts of terror committed by IS are doomed to failure,” said Major General Ghasem Soliemani, who heads the Quds Force of the Islamic Revolution Guard Corps.

Ebtekar: “The Judiciary will put the acid attacks case on a fast track.” 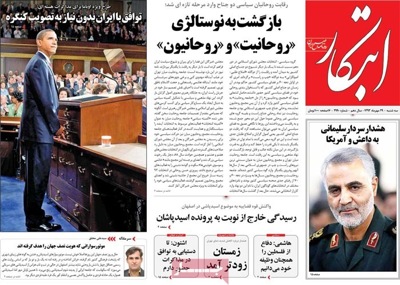 Emtiaz: “Tehran will see temperatures fall as much as 10º Centigrade, the Islamic Republic of Iran Meteorological Organization (IRIMO) reported. A cold front has swept the country.”

Emtiaz: “Police are one step away from arresting the one(s) behind acid attacks.” 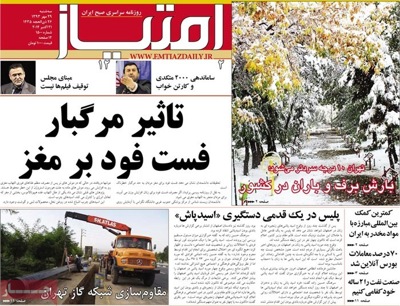 Ettela’at: “A deal on construction of two atomic facilities will be shortly signed with Russia,” said Director of the Atomic Energy Organization Ali Akbar Salehi.

Ettela’at: “Water shortage has prompted a number of people to evacuate their place of residence,” said the deputy energy minister.

Ettela’at: “Heavy snowfall has cut off 35 villages around Salmas, a city in West Azerbaijan Province.” 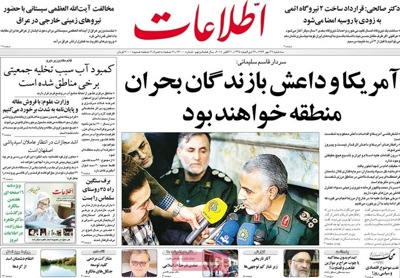 Hadaf va Eghtesad: Hossein Entezami, the deputy minister of culture and Islamic guidance, has paid a bedside visit to Erfan Parviz-Ansari, the former editor-in-chief of Tehran Times, an English-language daily. 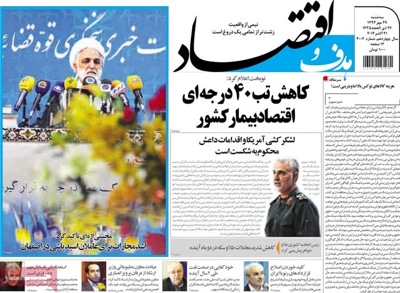 Haft-e Sobh: “The suspicious death of the American correspondent of Press TV along the border of Turkey and Syria.”

Haft-e Sobh: In a marathon reattachment operation, surgeons in Tabriz have given back a worker his severed hand. 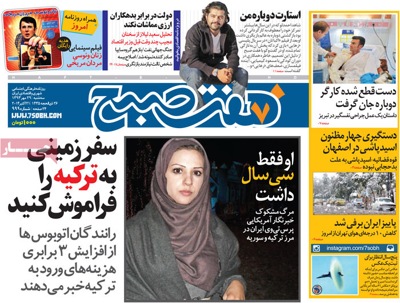 Hambastegi: “Terrorists are fighting a battle against civilizations and humanity,” said President Rouhani in a meeting with the Armenian prime minister.

Hambastegi: “Whether or not movies should hit the screen is determined by laws; we don’t need people to tell us what to do and what not to,” said Minister of Culture and Islamic Guidance Ali Jannati. His comments came after the head of parliament’s Cultural Committee appealed to the ministry to stop the screening of a few films. 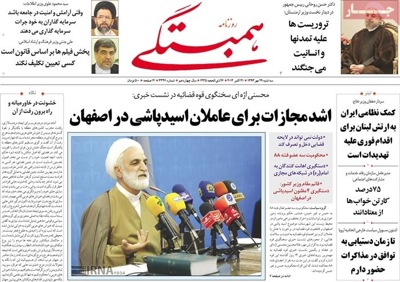 Hemayat: “Parliament is utterly determined to pull the plug on gas imports.” 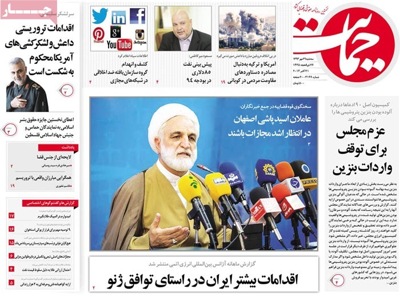 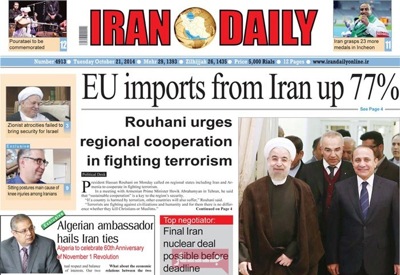 Isfahan-e Emrooz: “Isfahan is home to different monotheistic religions; the peaceful coexistence of the followers of these religions is the source of honor for this city and today we stand ready to revive “Safakhaneh” [an old congregation hall located in a predominantly Christian neighborhood of Isfahan where followers of divine faiths used to gather for debate]. We are honored to have lived with our Christian brothers for hundreds of years here in Isfahan,” said the provincial governor of Isfahan. 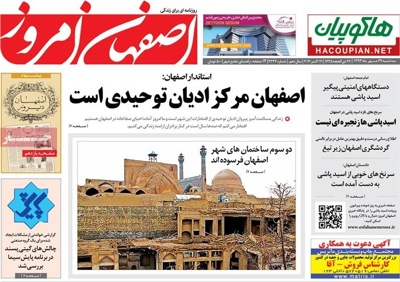 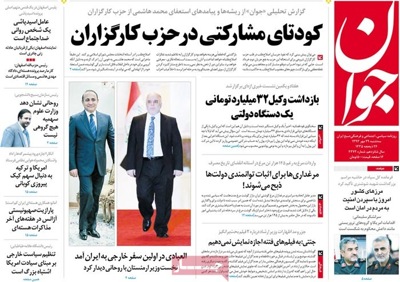 Jomhouri Islami: “Four individuals have been arrested in Isfahan in connection with the recent acid attacks,” said the deputy interior minister. 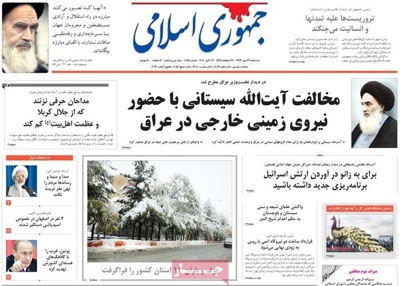 Kaenat: “Three individuals have been convicted of sedition for what happened after the 2009 presidential election.”

Kaenat: “A bloody day in Karbala: Eighty people were either wounded or sustained fatal injuries in a series of blasts in Iraq on October 20.” 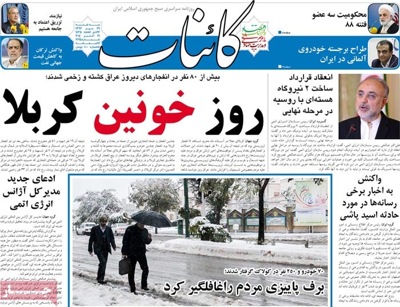 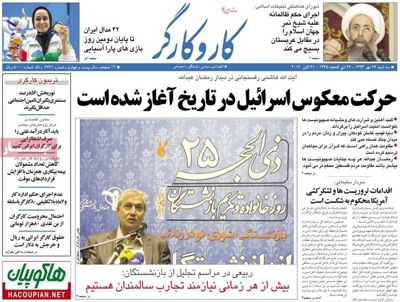 Kasb va Kar: “Iranian tunnel constructors establish a link between Europe and China.” The daily has picked this headline to highlight exports of Iranian technical and engineering services to Kazakhstan.

Kasb va Kar: “Implementation of this unjust verdict against [senior Saudi cleric] Sheikh Nimr al-Nimr will mobilize the world of Islam against Saudi Arabia,” the Coordination Council of the Islamic Propagation Organization said. 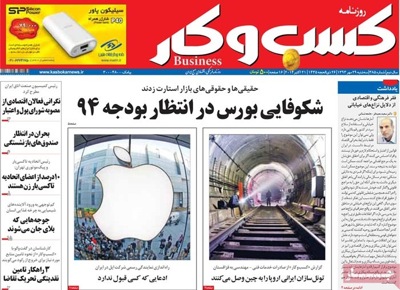 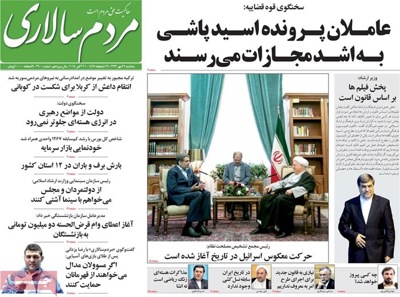 Payam-e Zaman: “Monitoring procedures should be intensified at border crossings to prevent contagious diseases from finding their way into the country,” highlighted the health minister. 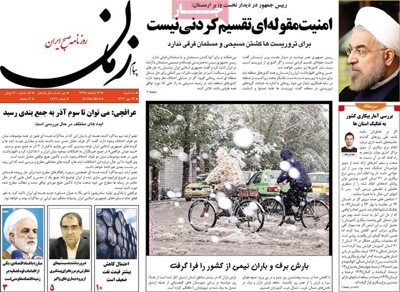 Resalat: “I do not want the Executives of Construction Party to share the fate of the Islamic Participation Front,” said former spokesman of the party Mohammad Hashemi, who has recently quit the post. 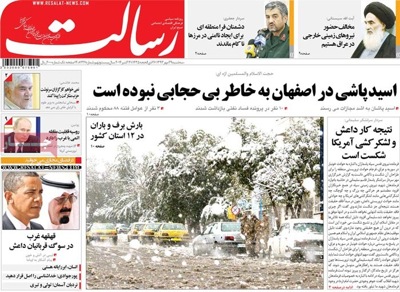 Roozan: “Under the previous government, the country’s economy was haphazard; a person who had no experience of running a grocery shop was put in charge of an auto-making corporation,” said Akbar Torkan, the chief advisor to President Rouhani.

Roozan: “Iran can ensure the security of the Middle East and Central Asia,” a member of parliament’s National Security Committee said. 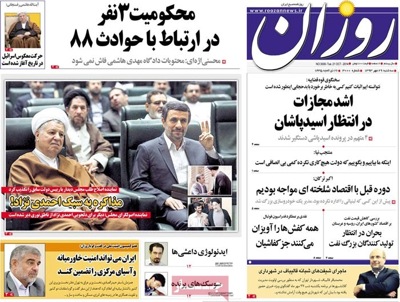 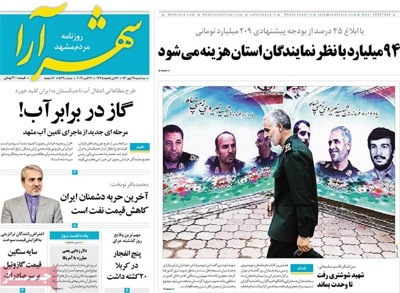 Sharq: “Half of South Pars’ personnel lost their jobs when Ahmadinejad’s government was in office,” said the provincial governor of Bushehr. 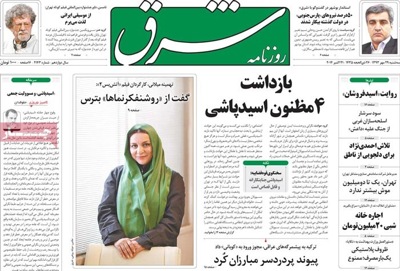 SMT: “The new budget appropriated to vessel-building projects and revocation of ship leases will save the shipbuilding industry as much as $146 million.” 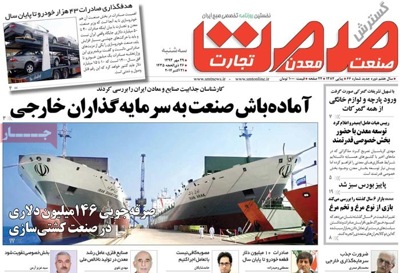 Tafahom: “Seventy percent of stock transactions are done online,” said the head of the Securities and Exchange Organization. 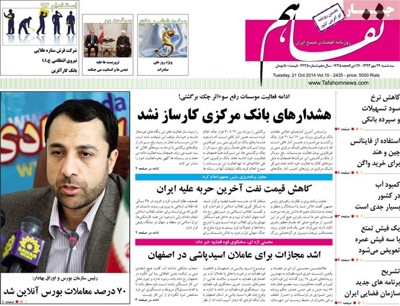 Tehran Times: “Iran and Armenia are to form a joint commission to boost trade ties.” 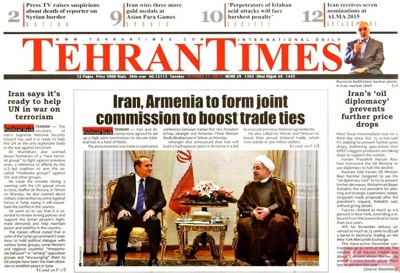 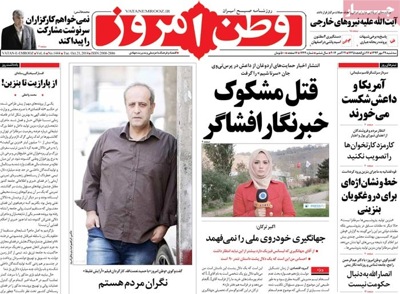