A look at Iranian newspaper front pages on Nov. 17

IFP has taken a look at the front pages of newspapers on Monday and picked headlines from 25 of them. IFP has simply translated the headlines and does not vouch for their accuracy.

The last farewell to Iranian pop singer Morteza Pashaei, whose untimely demise at the age of 30 met with the outpouring of grief, put several snapshots of his funeral procession on the front pages of Iranian dailies on Monday. A surprise visit by Omani Foreign Minister Youssef bin Alawi bin Abdullah to Iran was another top story of the day. Speculations as to whether or not the President Rouhani’s fourth pick to lead the ministry of science will get a nod from parliament grabbed a lot of front-page attention. The last story of the day revolved around the silver medal that 2012 Olympic gold medalist Behdad Salimi bagged in the 2014 World Weightlifting Championships in Almaty, Kazakhstan, losing the title of the world’s strongest man to Roslan Albegov from Russia.

Afarinesh: “Striking a nuclear accord [between Iran and P5+1] will be easier than having the talks extended,” said the German foreign minister. 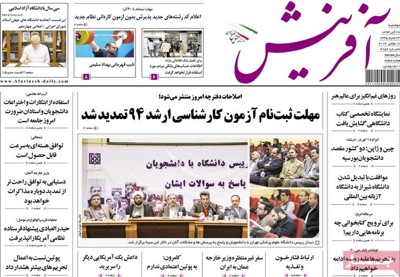 Afkar: “Rome seeks to beef up economic relations with Tehran,” said the Italian ambassador to Tehran. 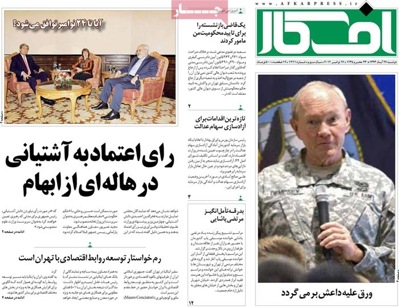 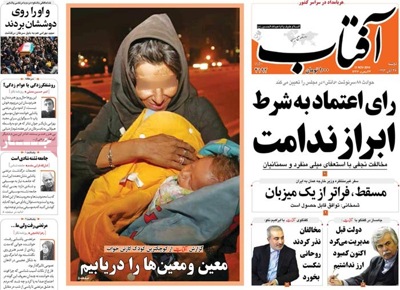 Arman-e Emrooz: “The traditional intermediary in nuclear talks between Iran and P5+1, the Omani foreign minister, paid a surprise visit to Tehran.” 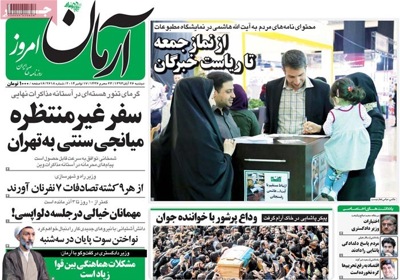 Asrar: British Premier David Cameron said that he was committed to rebuilding diplomatic relations with the Iranian government.

Asrar: “Acting Science Minister Mohammad Ali Najafi has not accepted the resignation of his deputy in charge of the Education Department and the head of the ministry’s Board of Trustees.”

Asrar referred to speculations that go around in some circles about a film which is expected to be screened in parliament on the day MPs will decide whether or not to grant Danesh Ashtiani [President Rouhani’s pick for science minister] a vote of confidence. The footage is said to be a prelude for the chamber to deny him a nod. 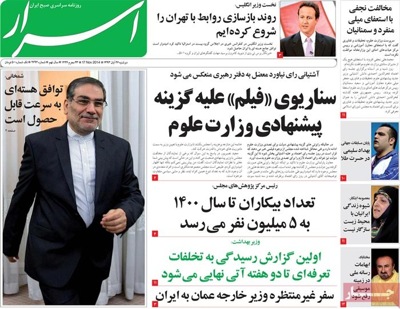 Ebtekar: “A few more ministers might face a vote of no confidence; headwinds of questioning and impeachment are blowing in the way of the government, shifting the goalposts for the government.” 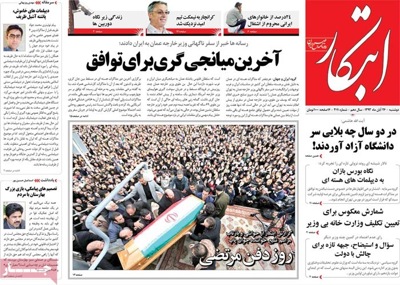 Emtiaz: “Book-reading rate in Iran is in a pitiful state,” said the Secretary General of the Public Libraries Authority. 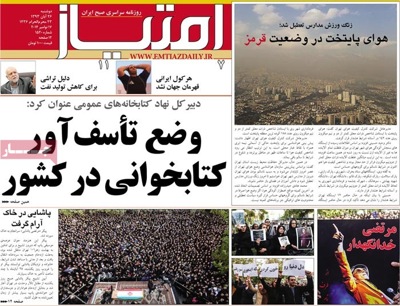 Etemad: “Air pollution has sent Director of the Environment Protection Organization Masoumeh Ebtekar to parliament [to answer questions by MPs].”

Etemad: “In an explicitly-worded letter, 760 academics have appealed to MPs to give Danesh Ashtiani a vote of confidence to take over the Ministry of Science.” 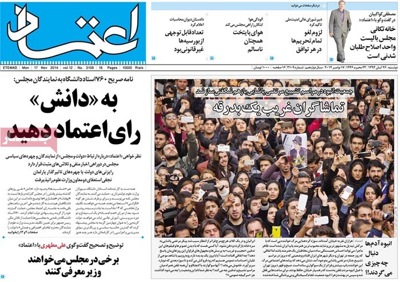 Ettela’at: “To exit recession, we are waiting for a decision by parliament,” said First Vice President Eshagh Jahangiri.

Ettela’at: “In a society where minimum freedom of critiquing is not guaranteed, we cannot think of growth and development,” said Director of the Environment Protection Organization Masoumeh Ebtekar. 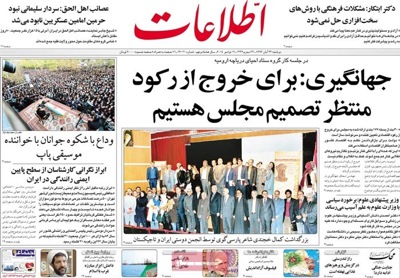 Haft-e Sobh has described as the most memorable farewells to Iranian cultural and sports figures in the contemporary history the funeral procession of Nasser Hejazi, a legendary goalie and coach, Gholamreza Takhti, an Olympic gold-medalist wrestler, Ali Hatami, an film director, screenwriter, art director and costume designer, and Mohammad Ali Fardin, a famous wrestler-turned-actor. The headline – ‘Memorable Farewells’ – appeared on the front page of the paper after tens of thousands turned up for the funeral procession of young pop singer Morteza Pashaei on Sunday. 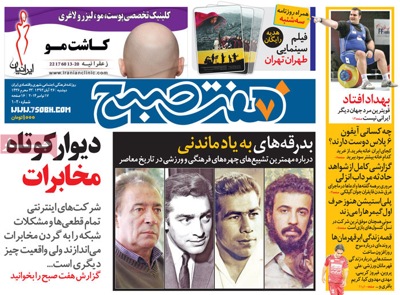 Hambastegi: “If granted the vote of confidence, I would work with fresh faces,” said Danesh-Ashtiani, the new pick for the Ministry of Science. 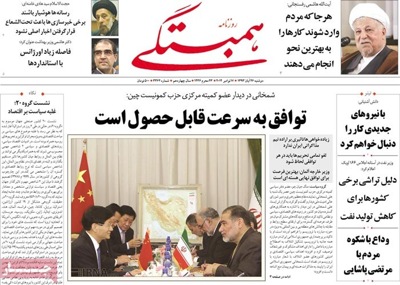 Hemayat: “US proposal in Muscat negotiations is reminiscent of the Treaty of Turkmenchay [an agreement between Iran and the Russian Empire, which brought the Russo-Persian War to an end in 1828. Under the deal, Iran ceded to Russia control of several areas in the South Caucasus],” said the chairman of parliament’s Nuclear Committee. 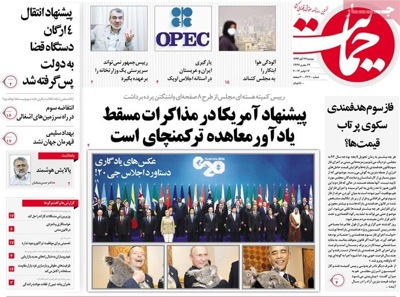 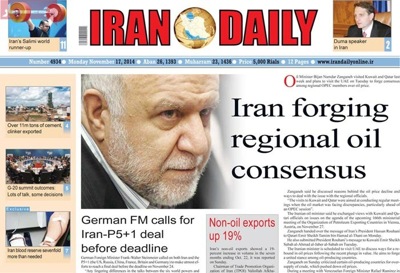 Javan: “Iran stands 189th among 190 countries when it comes to driving safety; deaths caused by car accidents are equal to a weekly plane crash with 350 on board.” 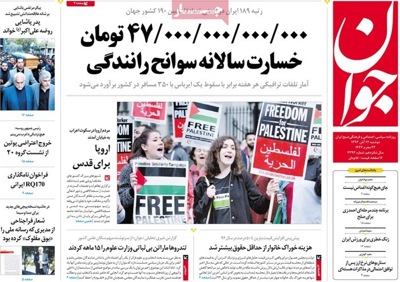 Jomhouri Islami: “The first final report about the violation of medical tariffs will be out in two weeks,” said the health minister. 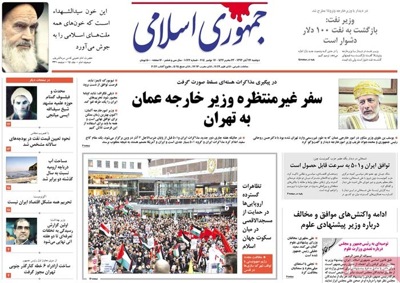 Kar va Kargar: “Americans should distance themselves from the atmosphere of Oman talks to have a deal struck,” said the chairman of parliament’s National Security and Foreign Policy Committee. 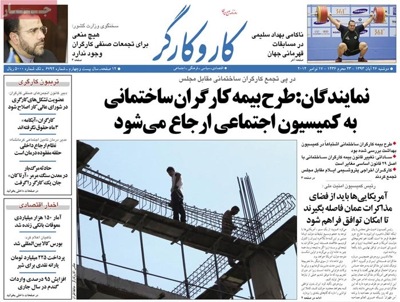 Kayhan: “A majority of MPs do not approve of President Rouhani’s pick for minister of science.” 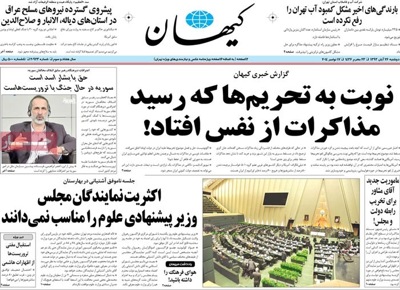 Khorasan: “A United Nations committee has issued a statement in favor of Iran after investigating a complaint by Iran whenHamid Aboutalebi [a veteran Iranian diplomat who was Tehran’s choice of envoy to the United Nations] was denied a visa by the US.” 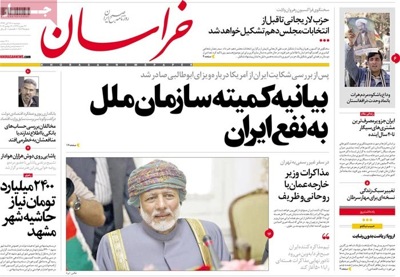 Mardomsalari: “There is no ambiguity about my credentials,” said Dr. Fakhreddin Ahmadi Danesh-Ashtiani, the new nominee for the top job at the Ministry of Science, Research and Technology. 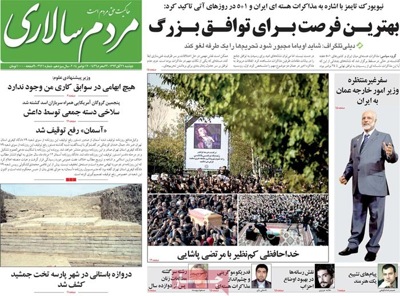 Payam-e Zaman: “President Rouhani will show up in parliament Tuesday to stand by his proposed science minister.” 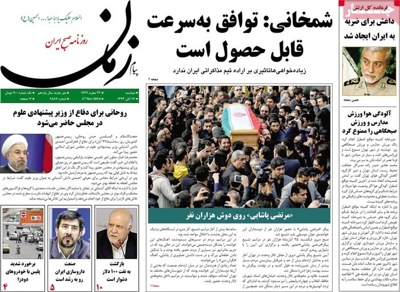 Qods: “Massive demonstrations have been staged in Europe in support of the Al-Aqsa Mosque.” 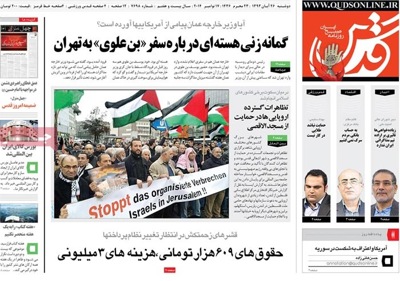 Resalat: “The perspective of the Vienna talks is not clear,” said Alaeddin Boroujerdi, an Iranian MP. 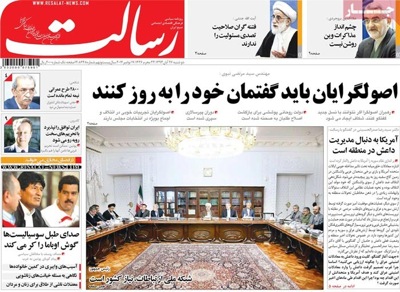 Roozan: “There was an outpouring of grief when the public paid their last respects to young pop singer Morteza Pashaei.” 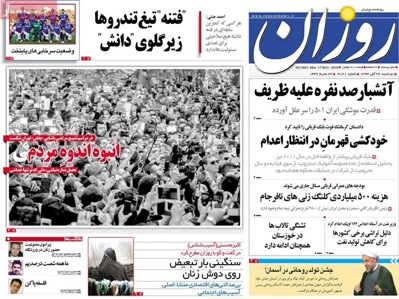 Sharq: “An indictment is likely to be issued against those involved in the case of illegal scholarships,” said the prosecutor of the Supreme Audit Court. 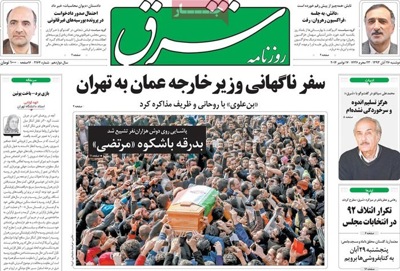 Tafahom: “The number of unemployed Iranians will soar to five million in 7 years,” said the head of parliament’s Research Center. 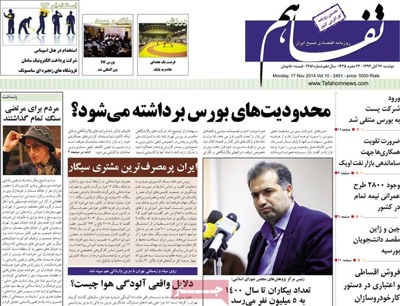