A Look at Iranian Newspaper Front Pages on June 22

IFP has taken a look at the front pages of Iranian newspapers on Wednesday and picked headlines from 25 of them. IFP has simply translated the headlines and does not vouch for their accuracy.

Newspapers on Wednesday covered the remarks made by the Leader of the Islamic Revolution Ayatollah Seyyed Ali Khamenei in a meeting with a group of poets. The headline mostly used by papers today was about the Leader’s call for poets to focus on US breaches of the JCPOA in their poems.

Another major story was the historic decrease of the headline inflation rate to a one-digit figure for the first time in more than 26 years.

The ongoing reactions to Foreign Minister Mohammad Javad Zarif’s decision to replace his deputy, and also the issue of astronomical salaries both remain top stories.

3- Countering Iran Is One of America’s Challenges in 2016: Carter 1- Boeing Signs Deal for Sale of 100 Planes to Iran 3- Zarif: It’s Insulting that They Claim Officials Are Replaced Based on Others’ Requests

4- Senior MP: People Should Not Be Worried about Takfiris

5- Marriage in Prison: In a Rare Move, Young Girl Gets Married to a Man on Death Row 1- Leader Urges Poets to Fulfil Their Responsibility in “Soft War”

3- Secrets behind Election of Parliament Speaker 1- Soros Warns Britons against Exit from EU: Brexit Will Make You All Poorer 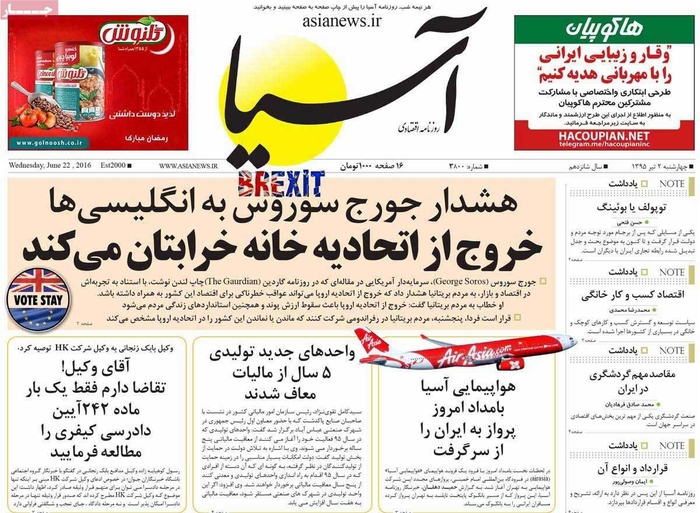 2- Kiarostami, the Filmmaker Who Created an International Reputation for Iranian Cinema, Turns 76 1- Axis of Resistance Not Dependent on Certain People: Zarif [in reaction to criticisms of his decision to replace Deputy FM Amir Abdollahian]

3- Russia to Deploy Forces to Syria

4- We’re Not a Fan of the Death Penalty: Prosecutor-General 2- 40% of Criminals Returned to Prison 3- Terrific Wave of Game of Thrones

4- Ahmadinejad, 11 Years Later: How Popular Is the Ex-President’s Doctrine? 1- Universities and Their Students Should Not Be Viewed as Security Threats: Rouhani 3- Decrease in Crime Rates in Iran 1- Al Khalifa Is about to Die: Hezbollah 2- Over Two-Fold Increase in Export of Iranian Medicine: Minister

3- Unprecedented Growth in Value of Iran’s Exports to Europe 1- Besides Politicians, Artists Should Also Work on US Betrayals in JCPOA: Leader

3- Bahrain and General Soleimani’s Command for Being on Standby 3- We Should Build Our Defensive Strongholds beyond Our Borders: Leader’s Advisor 1- The Night When Brands Were Disgraced: 4 Puma Shirts Torn, 1 Adidas Ball Burst in Only 90 Minutes 2- Report on Huge Salaries to Be Released Soon: Intelligence Minister