A look at Iranian newspaper front pages on Jan. 19

Appointment of a deputy interior minister months after the seat was vacated was the front-page news of many dailies on Monday. Also dominating the front pages of several newspapers were the martyrdom of a number of Hezbollah combatants in an Israeli raid on Syria, and the amount of annual bonuses laborers will receive at the end of the year.

Abrar: “For now, there are no orders to dissolve any bank,” said an observer member of the Money and Credit Council. [His comments came after the Central Bank of Iran reported that one bank and a number of financial institutes are operating without proper permits.] 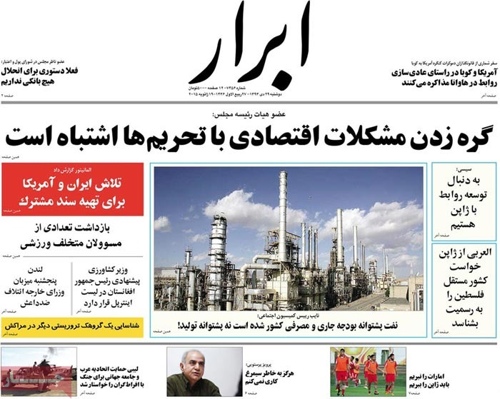 Afarinesh: The Supreme Court has upheld the main part of the ruling issued in the case of former first vice-president [Mohammad Reza Rahimi under Mahmoud Ahmadinejad].

Afarinesh: A ceremony has been held in honor of Mohammad Ali Keshavarz whose artistic career has spanned six decades. 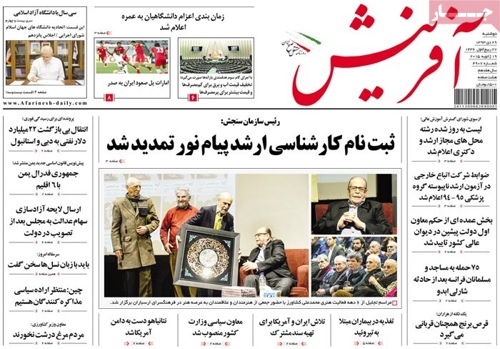 Aftab-e Yazd: The amount of lead in poultry is 47 percent more than the standard level. 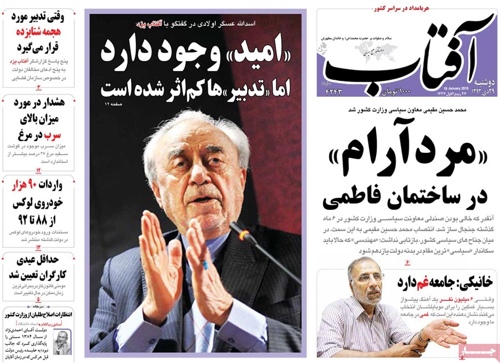 Arman-e Emrooz: The Ministry of Sports and Youth Affairs has announced that a number of individuals who have committed major sport offenses have been arrested. 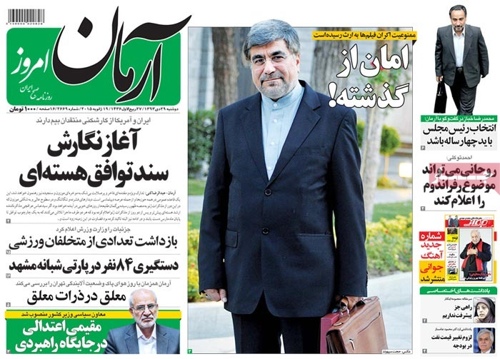 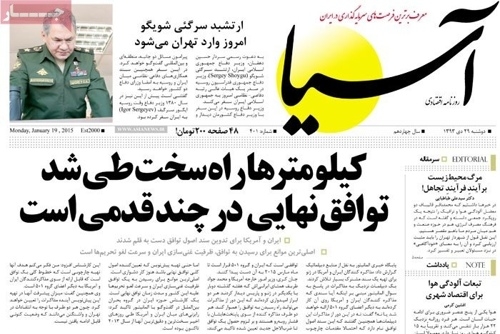 Asr-e Iranian: “After the go-ahead of parliament, water, electricity and gas offered to households with low consumption will be free,” said an MP. 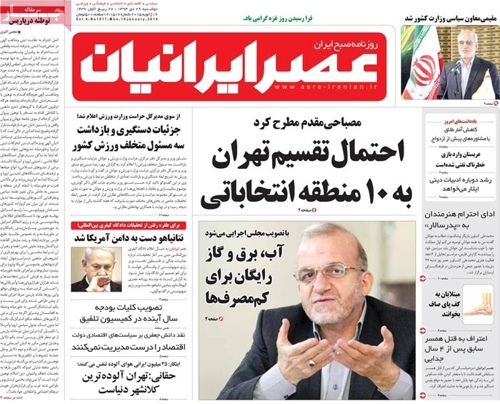 Asrar: “As many as 35 million people are exposed to pollution,” said the director of the Environment Protection Organization. 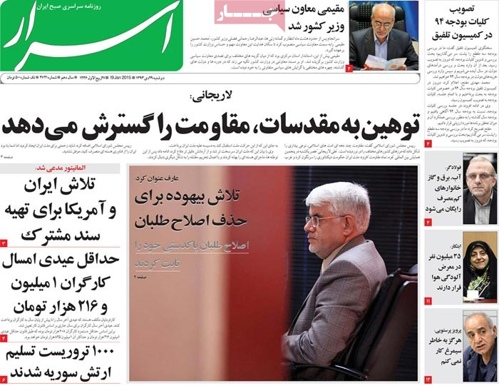 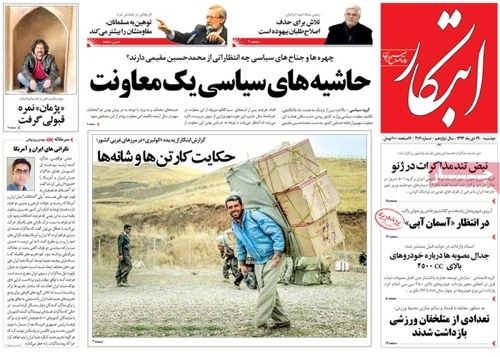 Eghtesad-e Pooya: The volume of trade between Iran and Iraq has hit the $12 billion mark. 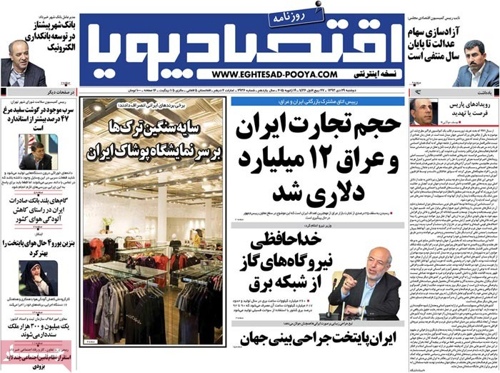 Etemad: “Nuclear negotiators are moving ahead within the framework [the establishment] has set,” said Ali Akbar Velayati, a senior advisor to the Supreme Leader.

Etemad: “I am closer to Mr. Hashemi [Rafsanjani] than to my father,” Minister of Culture and Islamic Guidance Ali Jannati said. 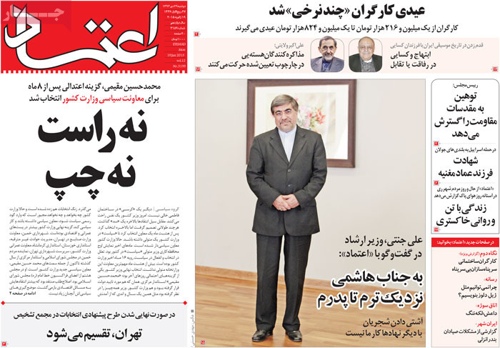 Ettela’at: A gun-running ring has been busted in Hormozgan Province.

Ettela’at: The Supreme Cultural Revolution Council has met to discuss the explosive growth of higher education in the country. 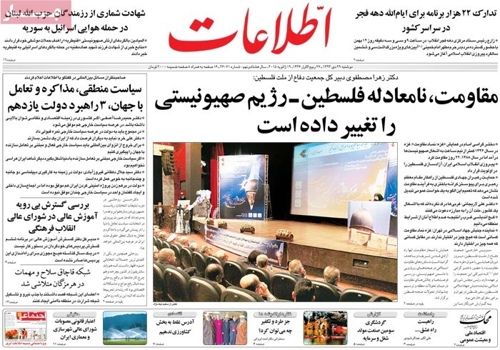 Hemayat: “The West will pay a dear price for hurling insults at the Prophet Muhammad,” said the Iranian attorney general. 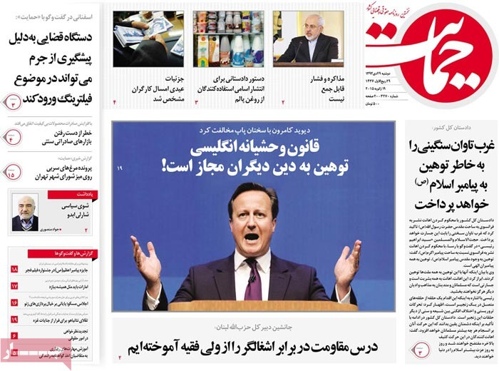 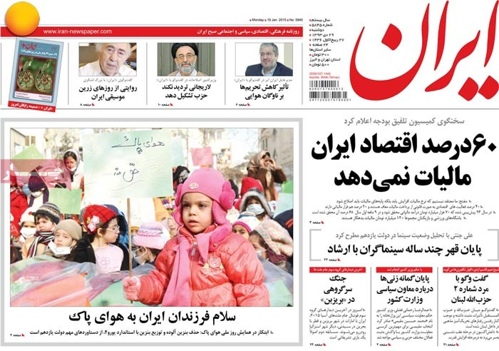 Javan: The son of Imad Mughniyeh [a senior member of Lebanon’s Islamic Jihad Organization and Hezbollah] and a number of Hezbollah combatants were martyred in a Zionist operation in support of terrorists in Syria. Jihad Mughniyeh has joined his father. 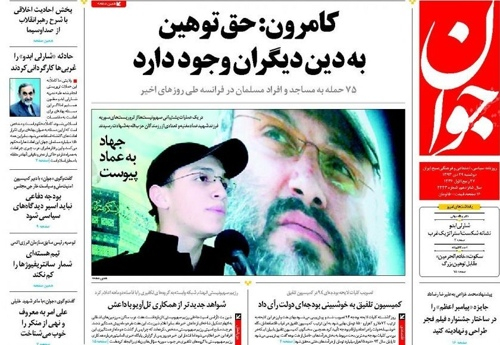 Kayhan: Students will gather outside the French embassy in Tehran at 15:00 local time on Monday to protest against the French government’s support for sacrilegious measures of Charlie Hebdo. 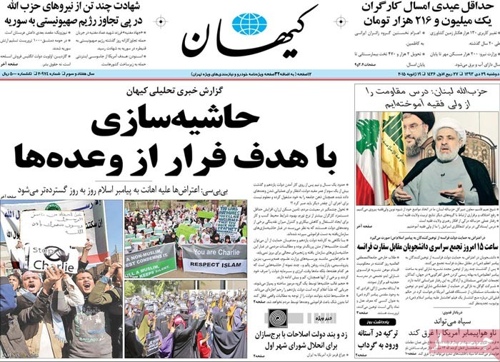 Sepid: “As many as 47 million Iranians have unhealthy eating habits,” said a deputy health minister. 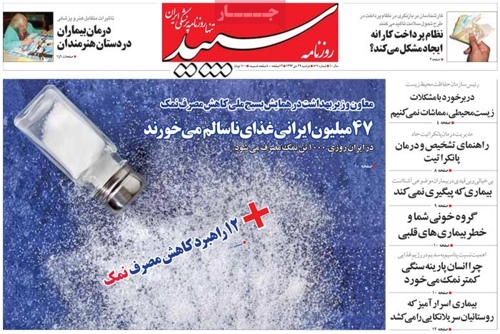 Shahrvand: “Iran is the Rhinoplasty capital of the world,” said the secretary of an international body contouring congress. 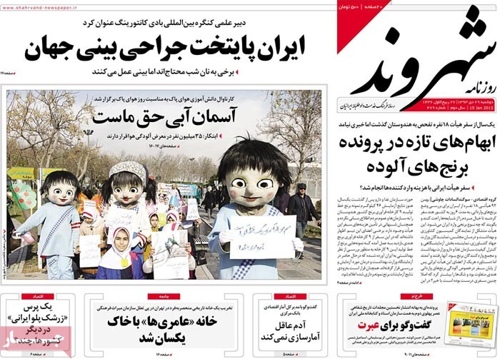 Siasat-e Rooz: “We can sink a US aircraft carrier,” said the commander of the naval forces of the Islamic Revolution Guard Corps. 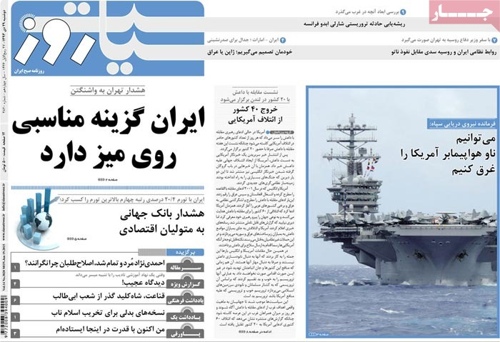 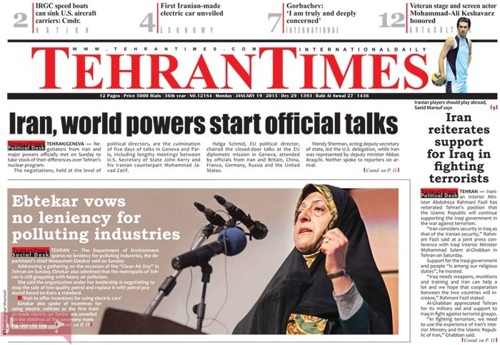