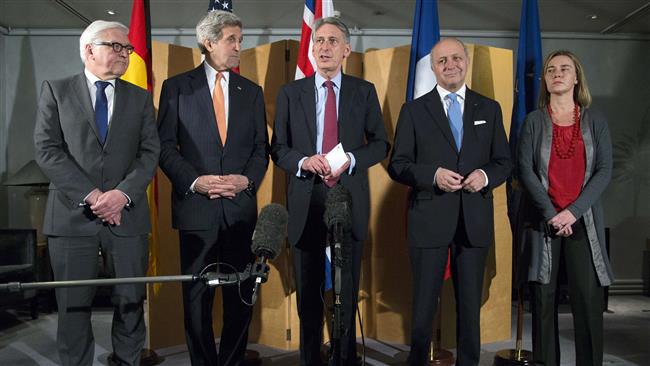 Britain says Western powers are united in approach to the nuclear talks, stressing they’ll continue to work with unity of purpose to secure a successful outcome.

The British foreign secretary says there is “unity of purpose” on the part of the negotiating side to the nuclear talks with Iran to secure a successful outcome from the negotiations.

“We will all continue to work together with unity of purpose to secure a successful outcome,” said the statement.

It was also underscored in the statement that “substantial progress” has been made in the negotiations.

There still remain differences on some “important issues,” the statement read.

Western officials said they were “equally committed,” adding, “Any solution must be comprehensive, durable and verifiable. None of our countries can subscribe to a deal that does not meet these terms.”

“Now is the time for Iran, in particular, to take difficult decisions,” the statement said.

“I believe that reaching a final agreement is possible and there is nothing insolvable and the other negotiating side should also make a final decision about this issue,” Rouhani stated.

The Iranian president added that the Islamic Republic has the necessary will for holding negotiations and clinching a nuclear deal within the framework of its principles and the bounds of its red lines.

Iran and P5+1 have succeeded in making progress during their latest round of talks in Lausanne, Switzerland, President Rouhani said.

He added that the negotiations will become tougher in the coming days and weeks as the two sides move to take the final steps toward securing a deal.

The Iranian president expressed hope that the negotiations would lead to an agreement which would result in peace, friendship and development for Iran and the entire region.

The latest round of nuclear talks ended in Lausanne on Friday after six days of intense and serious discussions among representatives of Iran, the United States and the European Union.

Iran’s Deputy Foreign Minister for Legal and International Affairs Abbas Araghchi said on Friday that the talks will resume on March 25.