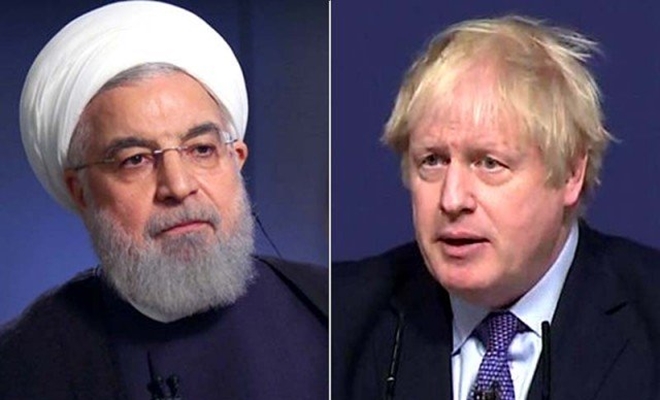 President of Iran Hassan Rouhani has reminded British Prime Minister Boris Johnson about the significant role of General Qassem Soleimani in the fight against terrorism, saying Britons in London would have not enjoyed security without the late Iranian commander’s efforts.

In a telephone conversation with the UK leader on Thursday, President Rouhani decried the comments from a number of British authorities about the American assassination of General Soleimani in Iraq, calling on the UK official to reconsider their stances.

“Undoubtedly, without Martyr Soleimani’s efforts, you wouldn’t have had calm in London today,” the Iranian president told Johnson.

President Rouhani also emphasized that the recent Iranian missile attack on a US military base in Iraq, carried out in retaliation for the American assassination of General Soleimani, has been in conformity with the Article 51 of the United Nations Charter and with the right of self-defense.

“Should the US make another mistake, it will receive a very dangerous response,” he warned.

Paying tribute to General Soleimani as a popular figure in the region and a hero of the war on terrorism, President Rouhani said the US government’s terrorist activities have seriously threatened regional security.

“I can say after four decades of friendship and cooperation with General Soleimani that he always sought to strengthen security and stability of the region,” he added.

The president then reiterated that regional security must be ensured by the regional countries alone, stressing, “The Americans and the White House have no understanding of the region, and recognized what a mistake they have made after their terrorist measure and following the uprising of the regional nations and the unity that was created.”

The recent insecurity is totally rooted in the US withdrawal from the JCPOA and in its illegal measures, President Rouhani underlined, adding, “This terrorist action by the US was taken in contravention of all international regulations. They (Americans) have imposed sanctions even on the medicine and foodstuff for the people for two years, and committed a big crime by assassinating General Soleimani.”

He finally noted that Iran will resume honoring its JCPOA commitments if the European parties fulfill theirs, and stated, “Tehran is still committed to cooperation with the International Atomic Energy Agency, and the agency will be monitoring Iran’s nuclear activities like the past.”

The UK premier, for his part, expressed sympathy with Iran over a series of incidents that have occurred in the recent week.

Johnson also expressed concern about escalating insecurity in the region and about the safety of British troops, and called on all parties to show self-restraint.

Stressing the need to improve the ties between London and Tehran, Johnson said saving the JCPOA would greatly contribute to international security.

The British prime minister finally called for efforts to salvage the JCPOA, which he described as a major international agreement.