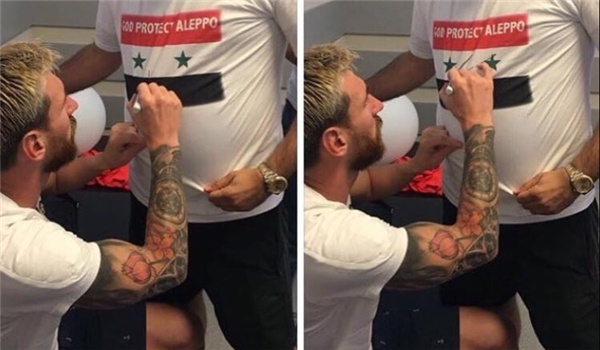 Lionel Messi, the Argentinian football legend who plays as a forward for Spanish club FC Barcelona and the Argentina national team, signed the T-shirt of one of his fans who supports Syrian President Bashar al-Assad.

“God May Protect Aleppo” read above the Syrian national flag on the T-shirt signed by Messi.

The social media activists forwarded images of the Argentinian star as signing the shirt by leaving comments like: “Messi signed the Syrian government flag”.

Many western and Arab media, including the Saudi-sponsored al-Arabiya website which supports the terrorists in Syria, also released Messi’s image, confirming that the person who is wearing the shirt is a pro-Assad football fan.

According to the Spanish newspaper, Messi earned 300,000 euro during a tour with his FC Barcelona in North America. He decided to donate a third of the sum to the children in Syria who are innocent victims of the ongoing war.

In March 2010 Messi was appointed Goodwill Ambassador for UNICEF, with the aim of supporting the rights of children.

The United Nations estimates that more than 100,000 people have been killed since the start of terrorists’ attacks in Syria.