Life in Iran Totally Different Before and After JCPOA: Rouhani 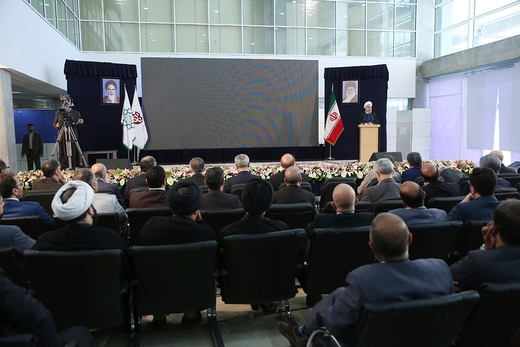 On Tuesday May 3, Iranian President Hassan Rouhani again praised the historic nuclear deal between Tehran and world powers (known as the JCPOA), saying that the Iranian nation has entered a new stage after the removal of anti-Iran sanctions as per the comprehensive deal.

“We have entered a new stage, and whether we want it or not, the post-JCPOA world is totally different from the world before the JCPOA,” Rouhani said in an address to the opening ceremony of the Tehran International Book Fair.

“Our nation achieved great successes in a historic and important event, after complicated negotiations, in talks with world powers.”

The nuclear deal was to the benefit of both sides, Rouhani said, stressing that the JCPOA was in the interests of Iran, the other parties, the region, and the world.

“Of course, there are certain factions in our region who feel the deal is detrimental for them. In a world where 188 countries gain such huge benefit from the deal, a couple of countries might be disadvantaged; this is normal,” Rouhani said.

“They [the regional sides] are very angry and seek to stonewall every day, but I am sure the great nation of Iran, having gained such a success, will continue its work as strongly as before,” the Iranian president asserted.

Elsewhere in his remarks, Rouhani stressed that the government should not interfere in all affairs. “The government is responsible for planning and policy-making,” he pointed out.

The administration must maintain [indirect] supervision, but it should be carried out by the people themselves, he went on to say.

“We should help authors to write books using their own minds, ideas, and experiences,” Rouhani said, adding that authors should not be afraid of censorship when they intend to write.

The 29th edition of Tehran International Book Fair will receive visitors from May 4 to 14 in the newly-built fairground located next to the Persian Gulf Highway.

The fairground halls have been built with a total area of 120,000 square metres, and comprise three types of salon. The main hall has a floorplan of 25,000sq.m, four middle-sized halls are as large as 15,000sq.m, as well as there being four small halls of around 8,000sq.m each.

These halls form the main venues of the fairground.  Each hall is a large, integrated space with a huge, beautiful roof, creating a unique atmosphere.

The Hall of Nations is constructed over two storeys with an area of 8,000sq.m, and a height of 24m.