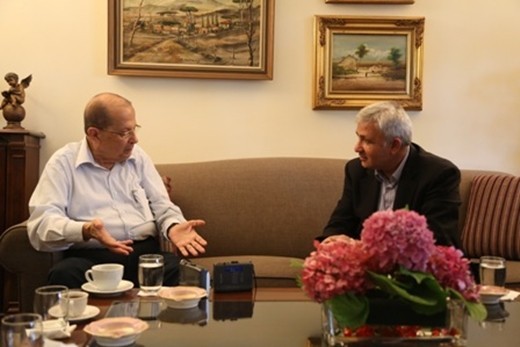 Michel Aoun, a senior Lebanese politician, has described the nuclear deal as a big success for Iran, urging the Arab countries to welcome the deal.

A senior Lebanese politician has expressed satisfaction with the nuclear deal between Tehran and 5+1, saying the US officials too have admitted that no countries are as zealous in fighting terrorism as Iran and Syria are.

Michel Aoun, the leader of the Free Patriotic Movement who is the nominee by the March 8 Alliance for the next presidential elections in Lebanon, told IRNA in an exclusive interview that Iran has achieved much before and after the conclusion of the nuclear agreement.

He said that the Iranian nation and experts have learnt to be self-sufficient and self-reliant during the long period of sanctions, adding that the Iranians are now preparing to adopt an open-door policy when it comes to dealing with the rest of the world.

He termed the nuclear agreement as a big success by a great Islamic country which follows the very peaceful readings of the Islamic teachings. This, the Lebanese politician added, creates calm and peace of mind for all.

Asked about the regional policies of Iran and Saudi Arabia, he said the two countries are not comparable from many aspects, adding that Iran holds different elections – including presidential, parliamentary and city councils elections. He also said heated political debates are quite common in the country, but the elections and debates are all absent in Saudi Arabia.

He then praised the peaceful cooperation the Jewish, Armenian and Assyrian representatives are leading in the Iranian parliament and voiced interest in paying another visit to Tehran.

The former commander of the Lebanese army went on to hail the skills and competence of the Iranian nuclear negotiating team and stressed the unique and unprecedented role of the Supreme Leader in advancing the talks.

Aoun described Iran as the biggest supporter of the Palestinian cause which has never stopped backing the oppressed nation.

He urged an end to the “unacceptable” situation in Yemen and said that aggression and siege – which have caused extreme plight for the Arab nation – have to be stopped.