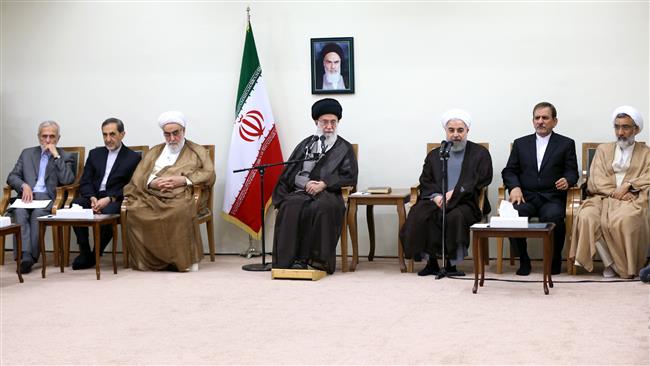 Supreme Leader of the Islamic Revolution Ayatollah Seyyed Ali Khamenei has thanked the Iranian negotiators for what they did during nuclear talks with P5+1.

Supreme Leader of the Islamic Revolution Ayatollah Seyyed Ali Khamenei has expressed gratitude to the Iranian nuclear negotiating team for its efforts in nuclear talks with P5+1.

The Leader made the comments in a meeting with President Hassan Rouhani and his Cabinet on Tuesday, the day Iran and six world powers reached a conclusion to intensive nuclear talks.

Rouhani, for his part, thanked Ayatollah Khamenei for supporting the Iranian nuclear negotiating team of his administration.

The president expressed hope that the nuclear conclusion reached in Vienna would prepare the ground for relieving pressure on Iran and disproving unfounded allegations fabricated by Iran’s enemies, and would also contribute to national progress.

After 18 days of marathon talks in the Austrian capital of Vienna, Iran and P5+1 – the United States, Britain, France, China, Russia and Germany – reached a conclusion on the Joint Comprehensive Plan of Action (JCPOA), which will put limits on Iran’s nuclear program in exchange for the removal of sanctions against the Islamic Republic.

Rouhani said that the expansion of close ties with neighboring countries and the continuation of nuclear negotiations were among his administration’s achievements in foreign policy.

“Under circumstances where the [Middle East] region is engulfed by chaos and terrorism, the Islamic Republic of Iran supports regional countries which are grappling with the scourge of terrorism and will continue on this path,” he said.

Speaking in a televised address on Tuesday after the conclusion of talks between Iran and P5+1, Rouhani said Iran managed to achieve all four objectives it was seeking throughout intensive nuclear talks with the six powers.

“We were following four objectives in these negotiations. As part of today’s agreement and under this Joint Comprehensive Plan of Action, all the four objectives have been achieved,” Rouhani said.

He enumerated the objectives as Iran’s ability to go ahead with its nuclear activities, lifting of “cruel and inhumane sanctions,” annulment of all “illegal” sanctions adopted by the UN Security Council against Iran and the withdrawal of Iran’s nuclear dossier from the Security Council.