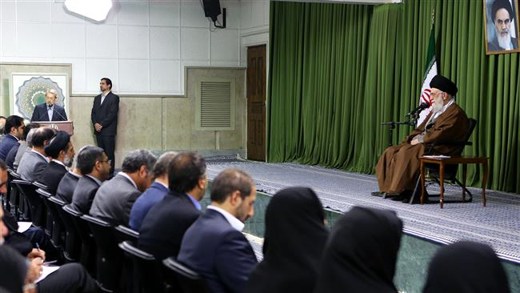 Supreme Leader of the Islamic Revolution Ayatollah Seyyed Ali Khamenei urged the nation to have faith in the belief that reliance on domestic resources will facilitate solving the nuclear issue.

The Ayatollah made the remarks in a meeting with members and the Speaker of the Iranian parliament which took place on anniversary of the legislative body’s establishment after the victory of the Islamic Revolution.

He said that the nuclear issue has become a complicated one but still all should keep in mind that there are other issues as well which will be solved if domestic resources are strengthened and improved.

Ayatollah Khamenei said the same views have been announced to officials both in writing and verbally.

These are the principal stances of the system in Iran, Ayatollah Khamenei noted.

Our brothers are really working hard, doing their best in such areas and they should go and persist on these stances to safeguard the interests of the country, the Supreme Leader added.

He also noted that while a common rhetoric and harmony is being used about the resistance economy, the main problem which relates to unanimity still persists.

Ayatollah Khamenei said he was aware of the shortage of resources and knew that sanctions were playing a role in this.

He urged officials to work out a way out of the problems and said the main answer to the question is less consumption.

The Ayatollah said priorities should be taken into consideration and all should know that insufficient resources are not a complicated problem which could not be solved.

The Supreme Leader said shortage of resources should not be used as an excuse to stop hard work.

Ayatollah Khamenei said that people should not think disputes with the US and the Zionist regime will be over once the nuclear issue is solved.

The Leader of the Islamic Revolution further said it is wrong to assume Iran’s problems with the US, the Zionist regime and the west is summed up in the nuclear issue.