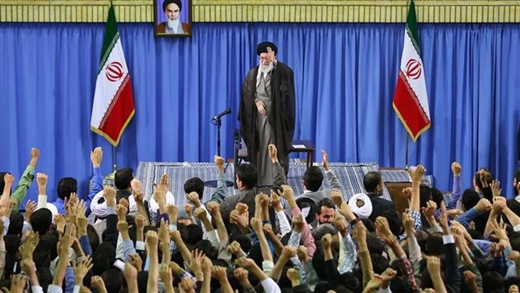 The Leader has emphasized that Iran’s refusal to accept an arrogant system is “the main reason” behind world bullying powers’ hostility toward the Iranian nation.

Ayatollah Khamenei called on the Iranian nation to be prepared to continue the struggle against arrogant powers.

The Leader made the remarks during a meeting with a group of university students in Tehran on Saturday.

“We have also told the negotiating officials that you are authorized to only negotiate over the nuclear issue; although the American side sometimes raises regional issues such as Syria and Yemen, our officials say we do not negotiate over these issues,” the Leader stated.

The Leader emphasized that Iran’s refusal to accept an arrogant system is “the main reason” behind world bullying powers’ hostility toward the Iranian nation.

Ayatollah Khamenei added that based on Quranic principles, the campaign against arrogance will never stop.

Ayatollah Khamenei also pointed to Iran’s “astonishing and spiritual presence and influence” in the region which have incurred the wrath of Saudi aggressors.

The Leader said Saudi Arabia and its allies have been pounding Yemen and brutally killing the innocent and oppressed Yemeni people over the past 100 days.

“Despite claims, the influence of Islamic Iran in the region is a God-given gift,” he stated.

The Leader added that the US and the reactionary states of the region admit to Iran’s regional influence in their covert talks, but they can do nothing about it.

Ayatollah Khamenei strongly criticized the West for its silence toward Saudi Arabia’s unrelenting war on Yemen.

The Leader said the United Nations Security Council has issued “one of the most disgraceful resolutions” on Saudi Arabia’s war on Yemen, in which it condemned those who are under the bombardment and not those who are dropping bombs.

On April 14, the 15-member council passed a resolution targeting the Houthi Ansarullah movement in Yemen.

The resolution, drawn up by Jordan and Arab states of the Persian Gulf, was adopted with 14 positive votes while Russia abstained.

Saudi Arabia started military aggression against Yemen on March 26 in a bid to undermine the Houthi Ansarullah movement and to restore power to the country’s fugitive former President Abd Rabbuh Mansur Hadi, a staunch ally of Riyadh.

Over 3,000 people, including 1,500 civilians, have been killed over the past three months in Yemen, according to the UN.