Leader has given go-ahead for talks, not friendship: Principlist cleric 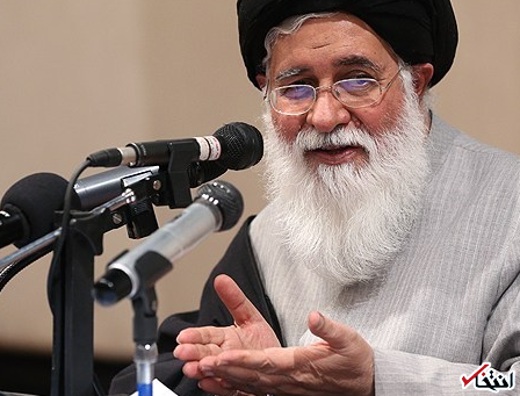 Ayatollah Ahmad Alam al-Hoda, the Friday prayer leader of Mashhad, has said that those who are appointed to the Cabinet should see the ideal outlook of the revolution.

Ayatollah Ahmad Alam al-Hoda, the Friday prayer leader of Mashhad and a member of the Assembly of Experts, said on Wednesday that principlists are not jockeying for position in the country; rather they insist on advancement of Islamic principles remaining the top priority of the revolution which should remain on track to further progress. The following is a partial translation of his comments as reported by Entekhab news website on February 4:

[…] What we’re saying is that officials need to take account of the ideal outlook of the revolution and run the country based on such an ideal, rather than sticking to economic matters at the expanse of the revolutionary cause.

That is the way the Supreme Leader deals with all groups and factions. They [the moderates] sought permission to hold talks and the leader granted permission for talks, and not for friendship. That they [the president’s men] mock their opponents by saying that principlists find fault with everything, including the way the foreign minister dresses, is not correct. What we are saying is that at a time when the US supported a [French] publication which released 3 million copies insulting the Prophet, our foreign minister was out for a promenade with his American counterpart.

No one questioned the stroll itself. […] Are you supposed to hold talks or strike up a friendship? We are not supposed to befriend a country with which the [Islamic] establishment has been at war for 35 years, particularly at a time when global powers are going out of their way to bring down our establishment.

We trust the government and the foreign minister because they have the leader’s backing. Opposition to them would amount to opposition to the leader. But what we are asking is whether the government is taking account of the ideal outlook of the revolution or it is just looking a few yards ahead? What we are saying is that those who are appointed government ministers should see the ideal outlook of the revolution.

Officials should run the country with an eye to bolstering the revolution. Our foreign policy should be aimed at promoting such a mentality, rather than using politics to simply advance the country’s economic agenda.