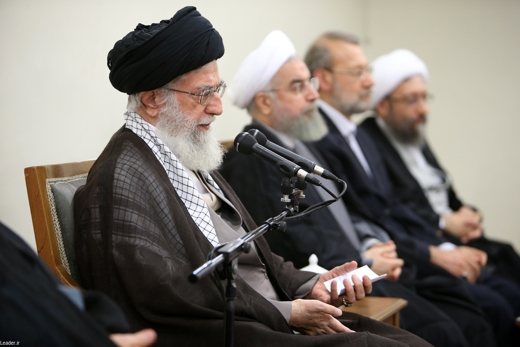 We should shed our passivity in cyberspace by tapping into the potential of young talents and taking wise measures, Ayatollah Khamenei noted.

Supreme Leader of the Islamic Revolution Ayatollah Seyyed Ali Khamenei on Monday elaborated on the need for Iran’s active presence in cyberspace, and urged young people’s proactive role in the field.

Addressing the chairman and members of the country’s Supreme Cyberspace Council, Ayatollah Khamenei underlined the necessity to produce attractive and authentic Islamic content in the cyberspace.

Highlighting the cyberspace’s influence as an “excellent soft power” in different fields, including culture, politics, economy, lifestyle, faith, religious beliefs and morality, Ayatollah Khamenei called for correct policy-making, wise and coordinated measures to bring, without any further delay, the country out of the existing passivity in cyberspace.

We should shed our passivity in cyberspace by tapping into the potential of young talents and taking wise measures, Ayatollah Khamenei noted.

Ayatollah Khamenei referred to “defining policy, macro management, planning, making necessary and timely decisions as well as efficient and up-to-date monitoring” in the cyberspace as the council’s overriding duty.

The Supreme Leader also called for efforts to elevate Iran to a cyber-power at the level of global, influential powers.

The council brings together the president, the parliament speaker, the judiciary chief, ministers of communication, culture, science, intelligence, education, defense, as well as the Islamic Revolution Guards Corps (IRGC) and police chiefs, a number of other officials and individuals.

Established in 2012, the council is tasked with defining policy and coordinating decisions regarding cyberspace.