Laylaz: Iran’s economy is not sanctionable (PART ONE) 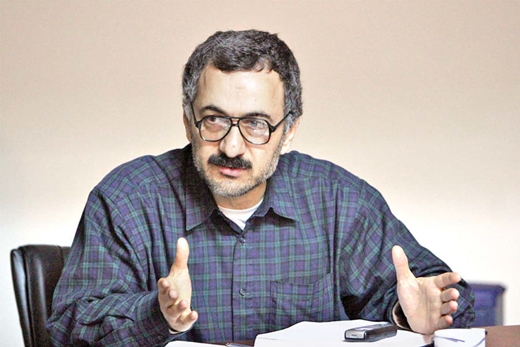 Saeed Laylaz, an Iranian economist, says that mismanagement of the previous government has caused the country more losses than sanctions.

The following is a brief translation of PART ONE of his remarks in the interview preceded by an introduction by Saeed Jafari Pouya, the interviewer:

Saeed Laylaz is among a handful of economists who know history and can analyze international politics. The experts in economics are usually versed in their own territory and perhaps have no interest in taking a broader look at political and international developments.

Laylaz, however, is blessed with these characteristics, something which renders him an outstanding analyst in international economics and politics. More than sanctions, he says, the sometime deliberate mismanagements of the previous government have created such a [problematic economic] situation in the country.

Iran’s construction is possible even under sanctions

Basically, the Iranian economy is not sanctionable. If you look back at the country’s experience over the past 20 years, you will realize that what I say is true. The D’Amato law [the “Iran Foreign Oil Sanctions Act” introduced by Senator Alfonse D’Amato (R-NY, 1981-1998) on September 8, 1995 to sanction foreign firms’ exports to Iran of energy technology] was never revoked. The act mainly focused on Iran’s oil, gas and petrochemistry industries, the same areas Iran posted the most growth in after the introduction of the congressional act. The reason: the establishment and government wanted to make progress in these areas despite all domestic problems.

No ties in the world are more unequal and unfair than those between the US and Cuba. The embargos the US slapped against Cuba are among the most despicable ones. Cuba’s embargos which have been in place for more than 50 years have been worse than Iran’s.

They wouldn’t even sell Iraq pencils

I realized during a trip to Iraq in 1996, when the sanctions [against Iraq] were at the highest level, that the Iraqi children did not have pencils. When I inquired about the reason behind the shortage of pencils, officials told me pencils had been on the sanctions list as a dual-purpose item  with the West arguing their graphite deposit could be used for raising the resilience of the warheads and ballistic missiles.

Where in Iran do you think we can find a place that bears resemblance to a country hit by sanctions? You can ask foreigners who come to Iran whether Iran looks like a country under sanctions. Sometimes the luxury items which are at many people’s disposal in Iran are not as plentiful in Europe and other developed countries. …

Of course, I do not say that sanctions have not brought pressure to bear on people. That the low-income layers of society have felt the pains of sanctions is a separate case, I want to say that the socio-political structure of Iran is not like that of a country which is reeling under tough sanctions. Such sanctions do not deliver a meaningful blow to the country.

Since the Napoleonic era, which marks the beginning of the modern-day sanctions, no governments have been brought to their knees because of sanctions. In Cuba’s case, it was the United States that was brought to its knees. Given the situation in Iraq, the US resorted to military action and an internal agreement was the endgame when it came to [sanctions against] other countries such as South Africa.

Iran is a country which has admittedly a $40b smuggling problem to deal with on an annual basis. That comes despite the fact that around 150,000 border guards are constantly clamping down on traffickers. What if the government looks the other way? Isn’t it possible for smuggling to add up to $100b? The answer is a definitive yes.

Since 2005, deliberate, organized and systematic plans have been at work to make Iran’s economy more dependent on imports. For instance, the country’s import of goods and services hit $100b in 2011, the highest in Iran’s history. The reason: a new bourgeoisie was formed in Iran the members of which knew they would be in office for a short period so they decided to accumulate wealth. They knew this would be achievable only through trade and imports, not production.

I do not believe that Iran’s economy has been hit hardest because of sanctions. Compared with the effect of mismanagement and intention to accumulate wealth through imports, the impact of sanctions [on the economy] is almost none. That’s why everybody has started to complain under the burdens of sanctions, but there is no sign of the sanctions in the country, neither in foodstuffs nor in the high-tech industries such as mobile phones. Foreign journalists who come to Iran and interview me say they are surprised by the high number of iPhones in people’s hands in Iran. It is not the case in Europe, they say.

Iran’s economy began to post a drop in efficiency in 2008 because the country had registered negative productivity and a fall in capital formation three years earlier. For the first time Iran’s capital formation was in single digits when Mr. Ahmadinejad was in office. It was a double-digit figure under President Khatami, but it turned into a one-digit number in the early years of the Ahmadinejad administration and then slid all the way into the negative territory.

Why an unprecedented global consensus against Iran?

In 2005 a sort of absurdity or lack of wisdom began to emerge in foreign policy and Iran paid a dear price for the slogans which turned out to be anything but useful, the denial of the Holocaust for instance. Such issues triggered the biggest and most powerful international consensus against a single country in the course of history. …

China and Russia too realized that some inside the then government seemed to wish for [anti-Iran] resolutions and they were walking down this path. I believe such a global consensus would have not been formed had it not been because of intentional or unintentional support by some individuals inside Iran. …

Which one is more important geopolitically, Iran or Syria? How come they [the UN Security Council members] issued resolutions against Iran five times, but they failed to issue even one against Syria? Think more about this question.

Russia has occupied Ukraine, but Germany is not ready to join the ranks of countries that are against Russia, arguing that it has around $15b in trade exchanges with Russia annually. Iran’s annual trade with China stands at $30b. It is crystal clear.

What have we done that such a broad consensus has been built against Iran? The country is blamed for its human rights record, namely for incarceration of a few people; Iran does not kill people on a daily basis, nor does it launch bomb attacks against anyone; Iran does not send arms across the border into other countries and has not occupied any country.

We had a nuclear program which was moving forward within its own framework … The measures the Ahmadinejad government adopted and the unnecessary ballyhoo it made brought this on us. Unfortunately, on the nuclear front we have moved backward.