‘Las Vegas Massacre Result of US Promotion of Violence Overseas’ 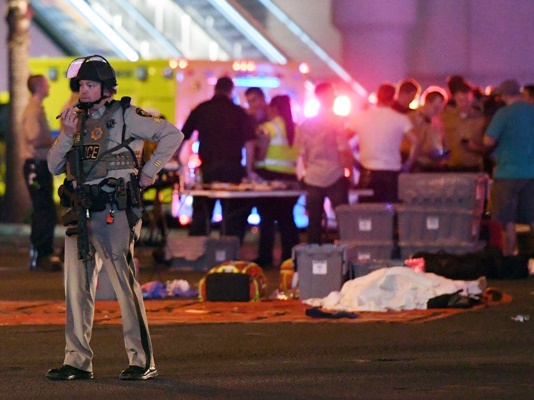 A political analyst says Washington is taking a big risk by promoting violence outside the US as it will finally impact the American citizens themselves.

Political commentator Masoud Yousefi has, in an opinion piece published in the Persian-language Tejarat daily newspaper, criticized Washington’s foreign policy as the American nation is still reeling from a deadly shooting incident in Las Vegas. He believes the violence and conflicts in the Middle East are a result of the United States’ passion for domination.

‌The obvious conclusion which can be drawn from the deadly Las Vegas massacre is that 68-year-old Stephen Paddock’s horrendously killing and wounding 600 people present at a nighttime music festival there was a result of US statesmen’s violence spilling over beyond the country’s borders to other areas, especially the crisis-hit Middle East.

The emergence of groups such the Taliban, ISIS, Jund al-Sham and other big and small groups were a pretext for the US to be present overseas. The numerous wars and much bloodshed which have occurred around the world over the past three or four decades have spilled over to Western societies, including Europe and the US.

Over the past year, several terrorist incidents, explosions and massacres have triggered insecurity and panic in Western countries. The US, which has been seeking to expand its financial and imperialistic domination in the world by promoting violence, has taken a big risk and bet. One cannot and should not regard the Las Vegas shooting as an incident which has nothing to do with US authorities’ domineering and expansionist policies.

Behind Washington’s expansionist strategy lies the powerful lobby of arms building factories which, in order to boost their arms trade and send their weapons to other countries, play a key role in drawing up US officials’ warmongering policies beyond the country’s borders.