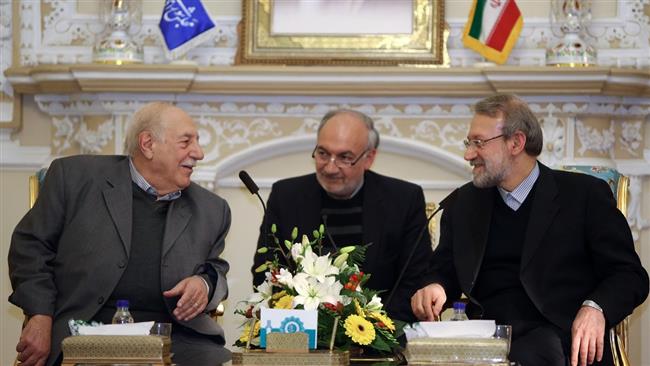 Iran’s Parliament Speaker Ali Larijani, has emphasized the need for stronger unity and solidarity among all Palestinian groups against the occupying regime of Israel and its Western allies.

In a meeting Monday with Ahmed Jibril, the head of the Popular Front for the Liberation of Palestine-General Command (PFLP-GC), in Tehran, Larijani praised the Palestinian nation’s resistance in the face of the Israeli occupation.

He further said the Muslim world attaches great significance to the liberation of Palestinian lands from the Israeli occupation, adding that Iran’s foreign policy “is to stand by the Palestinian people and support them” against Israeli bullying and the regime’s evil nature.

The new Israeli crime shows the Zionist regime is working hand in glove with the Takfiri terror groups operating against the Syrian government, Larijani said, adding, “The axis of [anti-Israel] resistance should be strengthened through stronger unity and cohesion among Palestinian, Syrian, and Lebanese forces.”

Hezbollah said in a statement that 25-year-old Jihad Mughniyeh, the son of slain Hezbollah top commander Imad Mughniyeh, and five other fighters lost their lives in the fresh Israeli aerial assault against Syria.

Jibril, in turn, thanked the Islamic Republic for backing the Palestinian cause and the liberation of Israeli-occupied al-Quds, adding that the Palestinian nation will always be grateful for Iran’s unwavering support.

The Palestinian official also pointed to the latest developments in the Middle East, describing the ongoing crises in Iraq and Syria as a plot hatched by the hegemonic powers against the anti-Israel resistance front in the region.