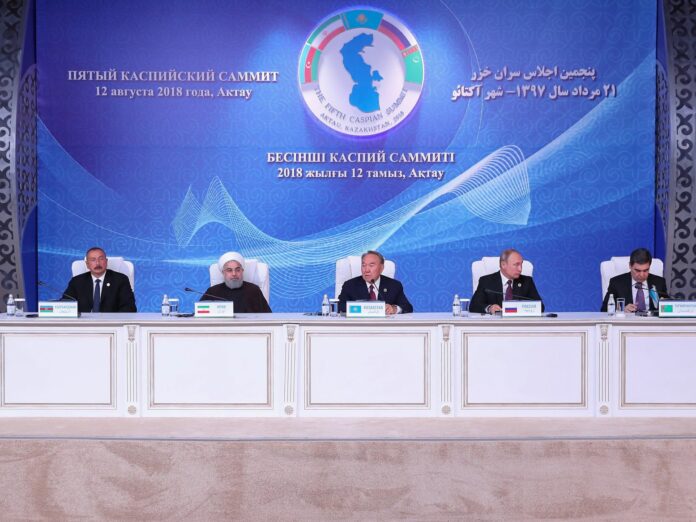 Leaders of five Caspian Sea littoral states – Iran, Russia, Kazakhstan, Azerbaijan, and Turkmenistan – on Sunday inked a historic Convention on the Legal Regime of the Caspian Sea as well as six other strategic and economic pacts.

The signing ceremony was held in Aktau, Kazakhstan, after a meeting between the five leaders on Sunday.

Speaking in a joint press conference in Aktau, President Rouhani stated that by signing the Caspian Sea Legal Regime Convention, a new step has been taken for better relations between the five littoral countries of the Caspian.

“Today, the five Caspian Sea littoral states took very important steps for strengthening regional security and better relations between each other, as well as taking better advantage of the Caspian Sea.”

“Relations of Iran with Turkmenistan, Kazakhstan, the Russian Federation and Azerbaijan have always been friendly and close and this is the main factor for signing such agreements,” he added.

He also said that one of the very important achievements of the Caspian Sea Legal Regime Convention was that it ensures security and stability in the sea.

“Being explicitly stated that the Caspian Sea belongs only to the five littoral states and also stipulating that no foreign force and military vessel is able to be present in it and that maritime security is exclusive to the five littoral states, and also stressing the fact that the territories of none of the Caspian Sea region state can be used against another country means that the stability and security of the sea is important.”

Earlier in the day, Rouhani also told the summit that Tehran is prepared to use its maritime access in the north and south to play a strategic role for development of trade and transportation in the region.

Speaking on Sunday at Caspian Sea Littoral States Summit, President Rouhani said, “Today, this region has turned into a successful model for guaranteeing peace, stability, friendship, good neighbourliness and progress and this summit is another step for further convergence in the region that needs to be strengthened by taking more steps.”