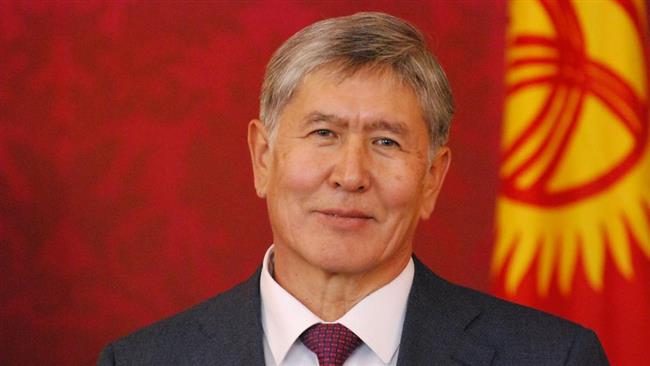 The outcome of the Iran-P5+1 nuclear talks will be instrumental in boosting regional stability, said the Kyrgyz president in a meeting with Foreign Minister Zarif.

Kyrgyz President Almazbek Atambayev has extended his felicitations to Iran over the agreement the country clinched with six world powers over its nuclear program.

In a meeting with Iranian Foreign Minister Mohammad Javad Zarif in Tehran Saturday, the Kyrgyz president said the outcome of the Iran-P5+1 nuclear negotiations will be instrumental in boosting regional stability.

Atambayev also touched upon the significance of promoting Tehran-Bishkek relations, namely on the economic as well as transit and transportation fronts.

The visiting Kyrgyz president stressed the necessity of drawing up a 10-year cooperation plan in order to achieve shared goals while pinpointing the importance of Iran and Kyrgyzstan working together to fight terrorism and extremism.

The visiting Kyrgyz president also held a joint press conference with Rouhani on Saturday and met with Leader of the Islamic Revolution Ayatollah Seyyed Ali Khamenei later in the day.

The Kyrgyz president arrived in Tehran on Friday heading a high-ranking delegation at the invitation of his Iranian counterpart.

During Atambayev’s trip to Tehran, the two countries inked eight memoranda of understanding on cooperation in the fields of agriculture, extradition of criminals, media, energy, air transportation and consular affairs as well as cooperation between the two sides’ foreign ministries and chambers of commerce.