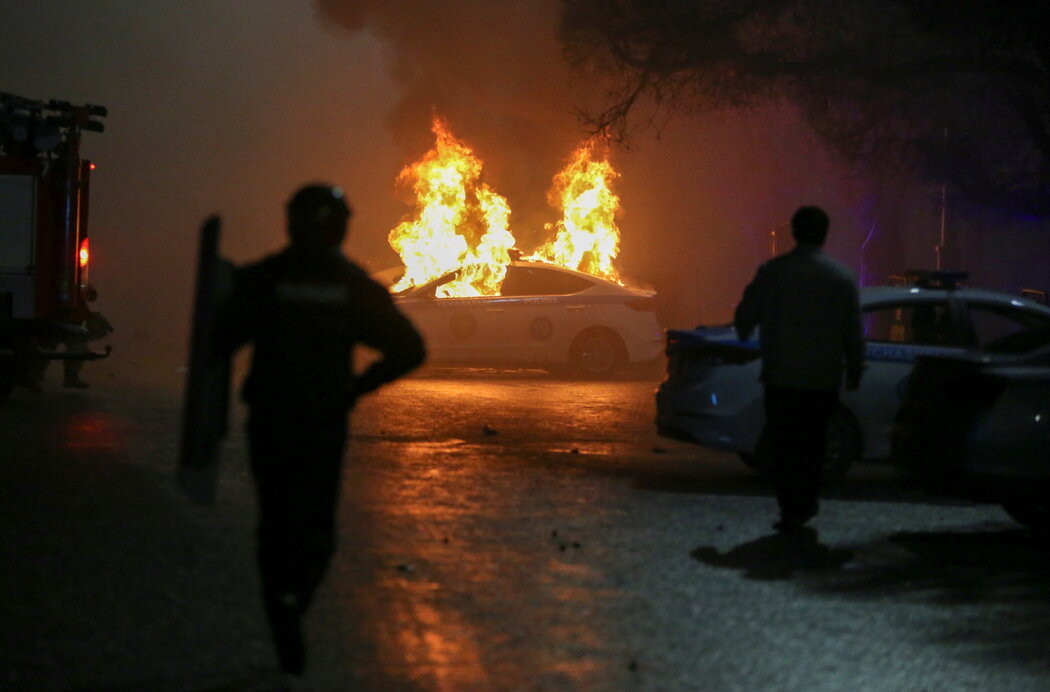 At least 18 security forces have been killed in clashes in Kazakhstan. No details on civilian casualties have officially been revealed. Kazakhstan’s law enforcement agencies have also detained nearly 2,000 demonstrators, according to the interior ministry.

At least 18 police officers and military servicemen have been killed in clashes in Kazakhstan, amid what the authorities are calling a “counter-terrorist” operation.

The updated figure was published by Kazakstan’s Interior Ministry late on Thursday. Nearly 750 law enforcement have received various injuries in the ongoing unrest, it claimed.

Only figures related to police and military casualties were made public, with no official information on killed or injured protesters, rioters, or what the Kazakh authorities are calling “terrorist gangs” available.

However, security officials had earlier described “dozens of attackers” having been eliminated in two separate attacks on the police HQ in the city of Almaty.

“Employees of the Almaty police department have launched a mop-up operation in the streets of Karasay-batyr and Masanchi. Measures are being taken to detain the violators. In total, some 2,000 people have been taken to police stations,” the statement added.

Known as “the southern capital” in Kazakhstan, the country’s largest metropolis has become a hotspot of protests, which then escalated into rioting, arson and looting of administrative buildings, businesses and shopping centers.

A UN official on Thursday alleged that a large number have been wounded during the unrest.

“Almost 1,000 people have reportedly been injured in the protests” the UN Office of the High Commissioner for Human Rights (OHCHR) announced in a statement on Thursday, which urged all the parties in Kazakhstan to “refrain from violence and to seek a peaceful resolution of grievances”. The OHCHR did not elaborate on their sources for the number cited.

Almaty authorities responded with a massive police operation on Thursday, and heavy gunfire was heard in the central Republic Square, where hundreds of demonstrators had previously gathered and where groups of rioters on Wednesday broke into the city administration building, setting it on fire. Law enforcement said they managed to secure the area, with the operation ongoing in other parts of Almaty.

The interior ministry stated late on Thursday it continues to search for rioters, detaining lawbreakers across the country. Those who put up “armed resistance” to the police and the military, will be “eliminated,” it warned.

Kazakhstan has seen a wave of unrest, which began as mass protests triggered by a twofold hike in liquefied petroleum gas prices at the start of the new year. The protests, which began in the country’s south-west, promptly spilled over into other regions, growing increasingly political and violent.

President Kassym-Jomart Tokayev branded the unrest a “terrorist attack” against the country on Wednesday, blaming the violence on organized, foreign-trained groups allegedly acting among the protesters. He has also reached out to the Russia-led Collective Security Treaty Organization (CSTO) for help, with the first peacekeepers already sent into the country. The CSTO is a security treaty between six former Soviet states, incorporating Armenia, Belarus, Kazakhstan, Kyrgyzstan, Russia and Tajikistan.

The approximate damage to business in Kazakhstan from unrest in the country is tentatively estimated at 40 bln tenge (more than $90 mln), Atameken National Chamber of Entrepreneurs announced on Thursday.

Russian Foreign Ministry spokeswoman Maria Zakharova has stated some US representatives do not understand what is happening in Kazakhstan and pass it off as the official position of Washington.

The diplomat commented on the statements of the White House press secretary Jen Psaki that the United States has questions about the legality of the request of the authorities of Kazakhstan to use the forces of the CSTO in the country.

“Everyone is accustomed to the fact that some representatives of Washington do not understand everything, passing it off a position of the United States,” Zakharova wrote in her Telegram channel.

The Russian Foreign Ministry has said that Moscow views the events in Kazakhstan as “an attempt, inspired from the outside, to violently, using trained and organized armed formations, to undermine the security and integrity of the state”.

Iran has also warned that some foreign actors are after misusing Kazakhstan’s tensions towards stoking unrest in the Central Asian country.

“It is clear that Kazakhstan’s developments are an internal issue, but some foreign parties are after manipulating the circumstances towards stoking the unrest and creating instability in the country,” Foreign Ministry spokesman Saeed Khatibzadeh noted.