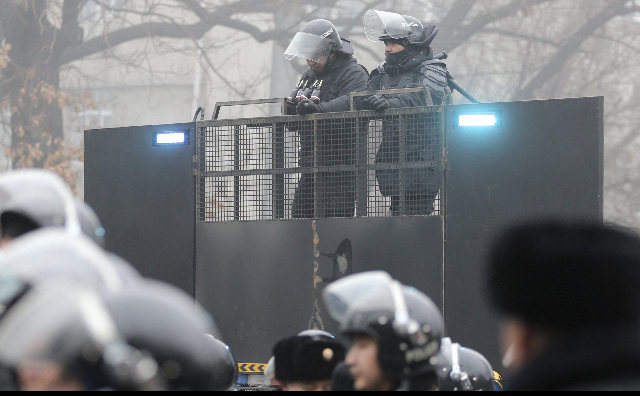 Kazakh President Kassym-Jomart Tokayev says, in the recent unrest in the country, there were six waves of terrorist attacks in Almaty, adding the overall number of terrorists was about 20,000,

“Gangsters and terrorists very well trained, organized and commanded by the special centre. Some of them were speaking non-Kazakh languages. There were at least six waves of attacks of terrorists at Almaty, total amount of them 20 thousand,” he wrote on his Twitter account.

“The analysis of the situation showed that Kazakhstan is facing an armed act of aggression well prepared and coordinated by perpetrators and terrorist groups trained outside the country,” he emphasized.

According to the Kazakh president, he ordered to launch a counter-terrorist operation “to eliminate the national security threat and to protect lives and properties of the citizens of Kazakhstan.”

“Currently, the counter-terrorist operation continues in our country. Large-scale and well-coordinated work is being carried out by the police. The National Guard and the armed forces to restore law and order in accordance with the Constitution,” he noted.

Kazakhstan will continue to ensure the security of diplomatic missions and foreign companies amid the unrest in the country, the president added.

“Kazakhstan will continue to ensure safety and protection of the foreign diplomatic missions as well as personnel and properties of foreign companies and investors,” he wrote.

“The policy of open doors to the foreign direct investments will remain a core strategy of Kazakhstan,” he continued.

Peacekeepers of the Collective Security Treaty Organization (CSTO), a post-Soviet security bloc, will stay in Kazakhstan for a short period of time, until the situation in the country normalizes, Tokayev said.

“Peacekeeping troops comprising of multinational forces of CSTO member states were deployed and will remain for the short period of time until the stabilization of the situation in Kazakhstan,” he wrote.

Protests erupted in several Kazakh cities on January 2 to grow into mass riots with attacks on government buildings in many cities several days later. Thousands have been injured and fatalities have also been reported. Tokayev asked help from the Collective Security Treaty Organization, or CSTO, a post-Soviet security bloc. CSTO peacekeepers have already been deployed to Kazakhstan. According to the Kazakh authorities, law and order had been restored in all of the country’s regions by the morning on January 7. However, the situation in Almaty is still very tense.

Kazakhstan’s law enforcement officers detained 3,811 people in connection with the riots in the country, the interior ministry reported on Friday.

According to the ministry, 26 participants in the riots were killed, another 26 people were injured.

The damage done to Kazakhstan’s businesses by riots is preliminarily estimated at 78 billion tenge (around 180 million US dollars), the Khabar-24 television channel reported on Friday.