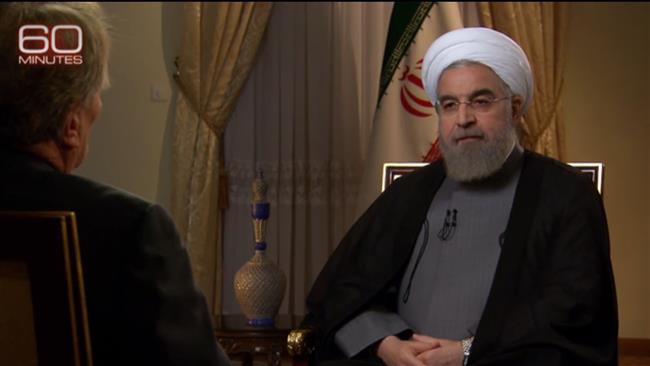 The agreement was difficult to reach and it was the right path chosen by all sides involved in Iran’s nuclear negotiations, President Rouhani said.

President Rouhani has said the recent nuclear agreement between Tehran and P5+1 has proved wrong the accusations that Iran’s nuclear work does not seek peaceful purposes.

“We wanted this incorrect accusation that Iran is after nuclear weapons corrected and resolved. The goal of Iran is peaceful activity,” Rouhani told American television network CBS in an interview aired on Sunday.

Rouhani said the groundbreaking agreement was “difficult” to reach, adding that it was the “right path” chosen by all sides taking part in Iran’s nuclear negotiations.

It was “a very difficult agreement to reach, with lots of ups and downs … But it’s the right path we have chosen. I am happy that we have taken extremely important steps on this issue and are in the process of taking the final steps,” he added.

The president said that the agreement recognizes Tehran’s right to further develop its nuclear program for peaceful purposes although it puts “limitations” on the country’s nuclear work.

Rouhani also expressed hope that the Iranian parliament and the Supreme National Security Council would ratify the agreement.

“The majority of our people, in opinion polls, have a positive view of the agreement … Institutions like parliament and the Supreme National Security Council, are usually not far removed from public opinion and move in that direction,” he said.

The president said the conclusion of the nuclear talks can pave the way for “decreasing” the disagreement between Tehran and Washington, but added that the two countries’ enmity “will not go away soon.”

“The enmity that existed between the United States and Iran over the decades, the distance, the disagreements, the lack of trust, will not go away soon,” he said, adding, “What’s important is which direction we are heading. … Are we heading toward amplifying the enmity or decreasing this enmity? I believe we have taken the first steps toward decreasing this enmity.”