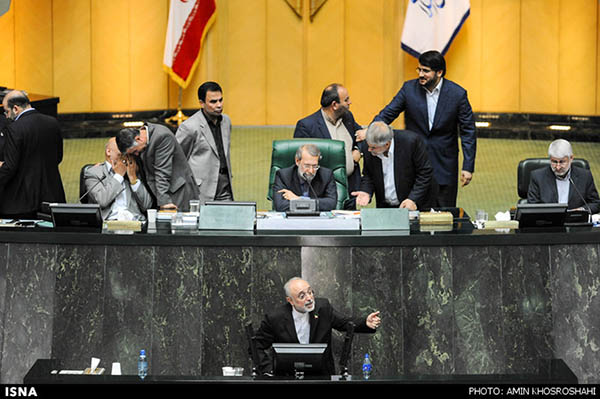 The Iranian parliament approved the JCPOA after some MPs took a jab at the foreign minister and the bill, and exchanged shouts and criticism at each other.

The Iranian parliament on Sunday passed the general outlines of the Government’s Reciprocal and Proportional Action Bill on the implementation of the Joint Comprehensive Plan of Action 139-100 on Sunday.

The parliamentary session got off to a normal start with Foreign Minister Mohammad Javad Zarif and his deputies Abbas Araghchi and Majid Takht-e Ravanchi present there to defend JCPOA.

Afterward Hamid Rasaei, a [hardline principlist] MP, called for a bill on JCPOA to be submitted to parliament.

Entekhab.ir published a report on what happened in parliament on Sunday and what the proponents and opponents of the bill said in the chamber. The following is a brief translation of that report which included comments by pro- and anti-bill MPs:

[…] Why should parliament get engaged in [discussing] a bill which is basically against the Constitution? Why do they want to make parliament deal with a done deal?  […]

Why does parliament want to pass a bill blindfolded with its hands tied? I think something is happening behind the scenes to make parliament get engaged in [discussing] a done deal. […]

The bill comes with a number of necessities, among them: protection of the Iranian nation’s nuclear rights and achievements; observing religious and legal aspects defined by the Supreme Leader on talks with P5+1; and preventing infiltration and unilateral measures of the other side.

This bill allows the government to voluntarily implement JCPOA if it can abide by what has been envisioned in nine articles and two notes for the implementation process, including the Supreme Leader’s fatwa on the atomic weapons, WMDs and nuclear disarmament, and the need for Iran to clarify its stances.

Through this bill, the Iranian parliament will shed light on its stances: we need to remove all nuclear weapons in the world.

The nuclear negotiating team managed to win some concessions in the talks. I call on fellow MPs to vote for the bill so that the fate of JCPOA can be fixed soon.

He slammed Speaker Larijani and said, “You are defending JCPOA single-handedly. You said you gave the bill to the Supreme Leader but he did not speak his mind.”

In reaction, Larijani said, “I said I talked with him on JCPOA and that the Supreme Leader had no intention to get involved.”

Zakani also hit out at irrelevant disagreements and said, “The Joint Comprehensive Plan of Action is a national issue, but some make comments as if I reap profits out of it.”

Kazem Jalali lashed out at opponents of the deal who keep quoting foreign officials as saying this and that. “To cite enemy officials simply to attack our own officials is not right. Wendy Sherman and Obama are no friends of ours. They will definitely use their comments to create tension in the country if they can.”

He further said that during the previous government Iran agreed to ship out its entire cache of fuel to import reactor fuel and the Ahmadinejad government agreed to the proposal. “The only one who objected was Mr. Larijani… Back then most principlist MPs kept silent. Why are you objecting now?”

He said the current director of the Atomic Energy Organization served as the foreign minister of Ahmadinejad. “If he wanted to act in line with personal priorities, he would have definitely acted differently. Individuals like Salehi are pious, sympathetic. They act above factional interests. Shouldn’t we fully trust their words?”

In conclusion, he said parliament does not approve of the deal, it simply allows the government to implement it with certain strings attached.

Director of the Atomic Energy Organization of Iran (AEOI) Ali Akbar Salehi, who was in parliament to defend the nuclear deal, told the chamber, “We have not negotiated in the vacuum. We based our talks on principles.”

He went to say, “I have not determined the framework of the talks. If we talked, we did so within a certain framework.”

Salehi, who was at the receiving end of a shouting match, further said, “I have kept silent so far. A few days ago, They wished me death. The other day, a man appeared on TV and said, ‘The average life expectancy among Iranians is 77 years. Salehi will die in 10 years.’ What kind of language is this? Are you playing God?”

He went on to say, “Someone swore to God in parliament to bury me with cement. Is this how they should talk? Is this the way you talk to people who seek to serve?”

After the boisterous session of the chamber, Kamaleddin Pirmoazen, an MP, said, “Thank God, today hardliners failed in their efforts to leave a bad taste in the mouth of the nation. God willing, the approval of the details of JCPOA and its implementation will increase our national wealth and help realize a national epic.”