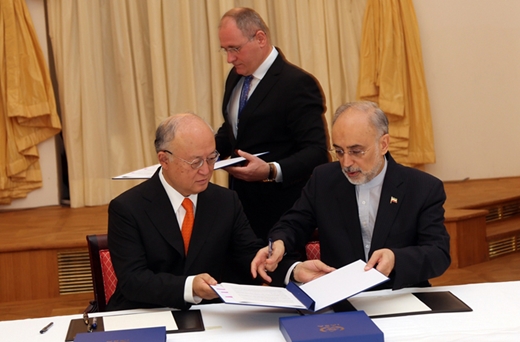 What is surprising is that Amano, who is the director general of an independent international agency, is summoned to the US Senate and he accepts to show up, Naghavi said.

US Republican senators have called on Director General of the International Atomic Energy Agency (IAEA) Yukiya Amano to appear on Capitol Hill to offer explanations about an agreement his agency has inked with Iran.

News that the UN nuclear chief has expressed readiness to brief US lawmakers on the deal not long after Iran and P5+1 clinched an agreement has raised concerns among Iranian critics of the nuclear deal about the biased approach of the UN nuclear watchdog in dealing with Iran.

On August 2, Fars News Agency filed reports on the reaction of two Iranian MPs to Amano’s acceptance of the invitation. The following is the translation of an excerpt of the two reports:

Mohammad Hassan Asafari, a member of parliament’s National Security and Foreign Policy Committee, said, “When we asked Ali Akbar Salehi, the director of the Atomic Energy Organization, whether such reports were true, he told us that there was no confidential agreement between Iran and the IAEA for Amano to report to US senators about. Apparently, that is not what has actually happened.”

The deputy denounced Amano as unreliable and said, “Unfortunately, the IAEA has turned P5+1 into P5+2 against Iran thanks to its [biased] behavior. If the agency really seeks to make international deals transparent, Amano’s appearance in the Islamic Consultative Assembly can serve the cause of transparency, too.”

He concluded, “Thanks to the leanings of the IAEA and its director general toward Western and Zionist intelligence services, the agency has proved that it cannot be a fair arbiter in the [implementation] of the Joint Comprehensive Plan of Action (JCPOA).”

Seyyed Hossein Naghavi Hosseini, another MP with a seat on parliament’s National Security and Foreign Policy Committee, said, “Ever since news about a confidential agreement between Iran and the IAEA was made public, US lawmakers have been seeking to learn about its content.”

He said that in Iran reports on the existence of a secret agreement were rejected by some and implicitly confirmed by others, adding, “US lawmakers were privy to the deal and summoned Amano to appear before the US Senate Foreign Relations Committee.”

Naghavi, who represents Qazvin in the chamber, said, “What is surprising is that Amano, who is the director general of an independent international agency, and not a US government secretary, is summoned to the US Senate and he accepts to show up.”

This whole incident shows there are special links between the IAEA and the US, the MP said, adding, “The invitation is designed to glean information about the confidential agreement. If other questions such as JCPOA and its text were to be discussed at the Senate hearing, his presence would have been unnecessary because all documents and explanations have been presented in their entirety and additional transparency is not needed.”