Iran Front Page
Home Politics Government Is a shakeup in the cards? 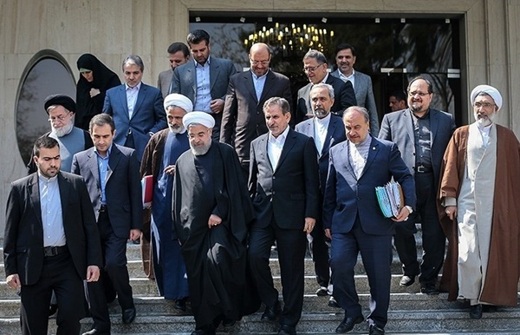 Although President Rouhani has a granted half-hearted green-light to a Cabinet shakeup, official news about change has yet to be made public.

It has been a while since speculations about a probable cabinet reshuffle by President Rouhani began to swirl, with many believing that some provincial governors and deputy ministers will be the likely targets of the shakeup. The following is the translation of a report released on May 10 by Fararu.ir, a news website, on who is likely to be on the chopping block:

The news was first made public by President Rouhani. During his Shiraz visit, when asked by journalists about the prospects of a cabinet reshuffle, the president said he would do that if necessary.

One week later, the president’s cultural advisor Hessamoddin Ashena said, “Visits to some provinces made it clear to the president that contrary to initial assumptions, some governors are not up to snuff to run provinces. Therefore, some changes are in the offing. Ministers and provincial governors are likely to be replaced as part of the reshuffle.”

Later, in another interview, however, Ashena said, “Any decision by the government will be made public through the government spokesman. My recent remarks were only a personal analysis and I raised the matter as a political analyst,” adding, no decision was made by the government as far as a reshuffle was concerned.

Other officials within the government have no knowledge of such a decision. Now the Cabinet reshuffle has become a talking point, but no one knows where it all started.

Although President Rouhani has granted a half-hearted green-light to a Cabinet shakeup, official news about change has yet to be made public. Over the last 22 months since he took office, except an unofficial report that the president dismissed Borujerd’s governor after he prevented Seyyed Hassan Khomeini, the grandson of the late founder of the Islamic Republic, from making a speech, there have been no other dismissals.

The interior minister in an interview has told a daily that the president favors change and seeks to appoint governors who see eye to eye with his government.

The provincial governors who failed to deal with those who take the law into their own hands over the last few months seem to be atop the dismissal list.

There are some ministers the government seems to be willing to either dismiss or transfer. Among government officials from the vice president for parliamentary affairs to deputy interior minister, no one had knowledge of the probable reshuffle. Although, speculation is rife about change, it’s still unclear when such change will come.

We must wait and see whether or not the government will recruit new forces to act differently in the second half of its term.