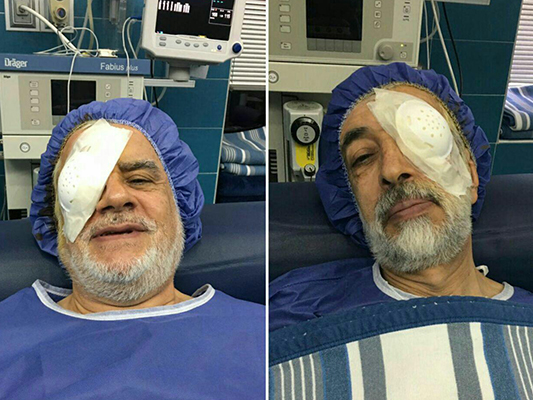 Iranian Health Minister Seyyed Hassan Qazizadeh Hashemi has called on Iranians to drop their so-called leftist and rightist tendencies and, instead, join hands to further boost national welfare and progress.

He made the comments in a short note after referring to the eye surgeries he recently performed on two senior politicians from the reformist and conservative camps.

A couple of days ago, a reporter asked me if I was a reformist, conservative or moderate. “None!” I answered. I would like to be the same young person that I used to be in the early years following Iran’s 1979 Islamic Revolution. At that time, there was no such thing as the leftist or rightist factions, and all of us would sincerely work together to boost Iran’s development and realize the ideals of martyrs.

I have always wished, from the bottom of my heart, that we Iranians would stay together and remain united. I have tried to be like that at the health ministry as well. I wish we would never get involved in factional tendencies and partisanship, which sometimes lead to infringement upon moralities. I wish we would return to the days following the Revolution; the days when everything was pure, sincere and divine.

Something interesting happened to me in recent days. I performed surgeries on the eyes of two of my old friends and high-profile politicians: Dr. [Mohammad-Reza] Aref and Dr. [Gholam-Ali] Haddad Adel. I had examined them both and found out that the right eye of [reformist figure] Dr. Aref as well as the left eye of [conservative figure] Dr. Haddad Adel needed medical operations.

“The serious problem facing the country surfaced while I was examining your eyes!” I told them ironically, referring to the idea that they cannot see the world from the other wing’s point of view.

Then I told them that political factionalism has, in fact, deprived us of a balanced vision.

Experience over the past 38 years shows we need all the country’s resources and assets for progress. The leftists, rightists and moderates should join hands to solve problems, something which is needed more than ever given the current situation in the region and in the world.

I hope as Mr. Aref’s right eye and Mr. Haddad Adel’s left eye regain their health, the rightists and leftists become more far-sighted, monitor the country’s friends and foes more carefully, pay more attention to the beautiful things around, and, instead of going for short-term opportunities, think about long-term national interests and lofty ideals for which the martyrs’ blood has been shed and lives have been lost.