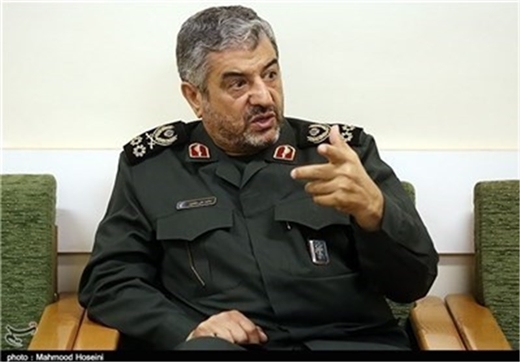 Some points inserted in the draft resolution are clearly in contradiction to Iran's major red lines, particularly in terms of its arms capabilities, and we'll never accept it, said Major General Jafari.

The commander of the Islamic Revolution Guard Corps (IRGC) on Monday described as void any resolution in contravention of Iran’s red lines, before the United Nations Security Council passed a resolution endorsing the document Iran and major world powers finalized on July 14 on Tehran’s nuclear program.

“Any resolution that would be in contradiction to our country’s red lines will have no validity,” Commander of the Islamic Revolution Guard Corps Major General Mohammad Ali Jafari told Tasnim on Monday.

Major General Jafari also leveled severe criticism at the draft resolution, saying, “Some of the points inserted in the draft (resolution) are clearly in contradiction to the Islamic Republic of Iran’s major red lines and violate them, particularly regarding (Iran’s) arms capabilities, and we’ll never accept it.”

The commander recommended the UNSC not to “waste its time” passing a resolution that violates Iran’s red lines.

“What matters to me as a military official more than anything else is serious persistence… when it comes to the very critical red line, namely maintaining and upgrading Iran’s defense capability,” the top officer underscored.

The IRGC commander explained that not a single Iranian official has a problem with holding negotiations and striking a “good deal” over the country’s peaceful nuclear program.

Major General Jafari also debunked a propaganda campaign the enemies have launched as part of psychological warfare to create “fake polarities” in Iranian society over the nuclear issue.

Echoing previous remarks by Supreme Leader of the Islamic Revolution Ayatollah Seyyed Ali Khamenei, the commander said the text of the nuclear conclusion has to be scrutinized in a legal process before a final view could be announced.

“It seems that some have deliberately created a fake atmosphere in order to ignore such a legal process and block the path to assessing the (nuclear) conclusion in a timely and detailed manner and placing it in a legal path in compliance with the Iranian nation’s interests.”