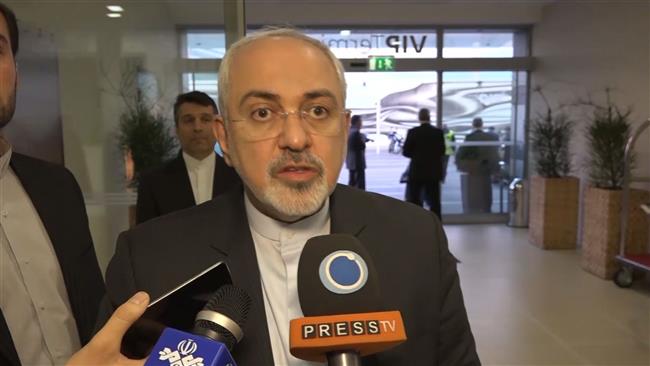 Iranian Foreign Minister Mohammad Javad Zarif says a military solution to the conflict in Syria is nothing but an “illusion.”

Zarif made the remarks after arriving in Vienna late on Monday to take part in an upcoming International Syria Support Group (ISSG) meeting.

“We are going to continue to insist on the need for a comprehensive ceasefire, of course excluding terrorist groups,” Zarif told the Press TV correspondent.

He stressed that a political solution is the only way to solve the crisis in Syria, which has been gripped by foreign-backed militancy since March 2011.

“Unfortunately there seems to be a persistence by some that they want to pursue a military solution, that illusion has to come to an end and they should look for a political solution,” the Iranian foreign minister said.

Iran, Russia, Turkey and Saudi Arabia as well as representatives from the European Union and the Arab League are among the countries participating in the ISSG meeting on Tuesday. The 17-nation ISSG aims to discuss the stalled negotiations, challenges in maintaining the February ceasefire and the delivery of UN humanitarian aid to various areas across the war-ravaged country.

Almost immediately upon arrival, Zarif held talks with UN Special Envoy for Syria Staffan de Mistura (seen below) over the upcoming ISSG meeting after he held a meeting with EU Foreign Policy Chief Federica Mogherini where they discussed regional and international developments and the implementation of the Iran’s nuclear deal.

Iran and the five permanent members of the UN Security Council – the United States, France, Britain, China and Russia – plus Germany signed a deal known as the Joint Comprehensive Plan of Action on July 14, 2015 following two and a half years of intensive talks. The two sides started implementing the JCPOA on January 16.