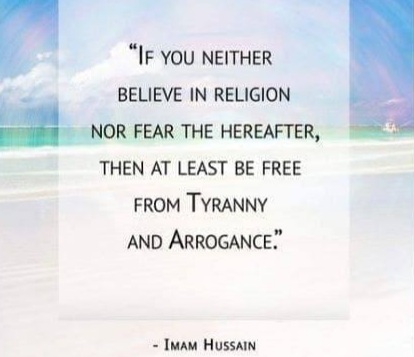 Iran’s Foreign Minister has expressed his condolences over the martyrdom anniversary of the third Shiite Imam, Hussein ibn Ali, stressing that resistance against oppression and the struggle for freedom continues across the world.

In a message sent on his Twitter account, Mohammad Javad Zarif said despite the wishes of a long line of oppressors, the battle against tyranny did not end in Karbala, or in 670 CE.

“14 centuries later, resistance to oppression and struggles for freedom continue across the globe,” reads Zarif’s Tweet.

He also quoted this remark by Imam Hussein (AS):
“If you neither believe in religion, nor fear the hereafter, then at least be free from tyranny.”

In the end, Zarif noted that on Ashura 2021, Hussein’s beacon shines on.