First Vice President of the Islamic Republic of Iran Es’haq Jahangiri has offered his congratulations to the Qatari people and government on the Arab country’s National Day.

In a message for Prime Minister of Qatar and Minister of the Interior Sheikh Khalid bin Khalifa bin Abdul Aziz al-Thani on Friday, the Iranian Vice President congratulated the Qatari premier and nation on the National Day.

Highlighting the bonds and commonalities between the Islamic Republic of Iran and the State of Qatar as two friendly and brotherly nations, Vice President Jahangiri expressed hope for the expansion of bilateral relations in all fields in light of cooperation and joint efforts between the two sides.

Qatar’s National Day is a national commemoration of unification in 1878. It is celebrated annually on December 18. 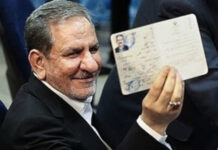