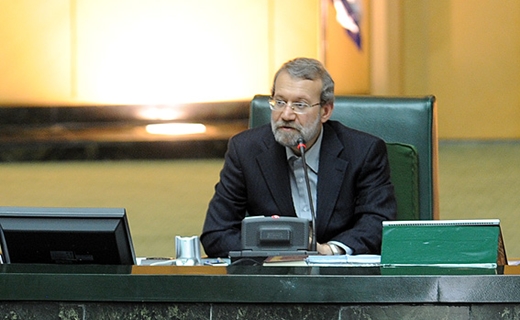 The speaker of the Islamic Consultative Assembly has warned fellow MPs against getting carried away by a politically charged atmosphere over the nuclear issue.

The Iranian parliament speaker has voiced strong support for the nuclear negotiating team and called on fellow parliamentarians to avoid ill-thought-out reactions to the nuclear issue.

Bagher Hosseini, a member of parliament’s National Security and Foreign Policy Committee, quoted Ali Larijani as making the comment Sunday in a meeting of a Principlist Caucus [the Followers of the Leader (Rahrovan-e Velayat)].

He said that the speaker also expressed bitter opposition to extreme reactions [to the process of nuclear talks], among them the motion – tagged with triple-urgency status – a number of Iranian MPs have signed [asking for a halt to nuclear talks until the US stops issuing threats against the Islamic Republic and apologizes to Iran].

The following is the translation of what else Hosseini quoted Larijani as saying in the meeting as reported by the Iranian Students’ News Agency:

The speaker stressed in the meeting, “We are at odds with the nuclear team over nothing, so we need to stay clear of hasty reactions and let the country’s negotiators successfully advance the objectives of the Islamic Republic of Iran at the negotiating table.

“The Supreme Leader has voiced his support for the nuclear negotiating team, and we in parliament should follow the Leader’s lead, too”.

Larijani also said, “Currently, the US politicians – Democrats and Republicans – are at loggerheads, but we in Iran are not opposed to the country’s nuclear team; rather, we support our negotiators.

“By the same token, parliament should keep its distance from getting carried away and making immature decisions. It should [instead] release a statement in reaction to a Senate bill on Iran nuclear deal”.

Hosseini also said that a statement will be read out on parliament floor in reaction to the US Senate bill later Sunday.