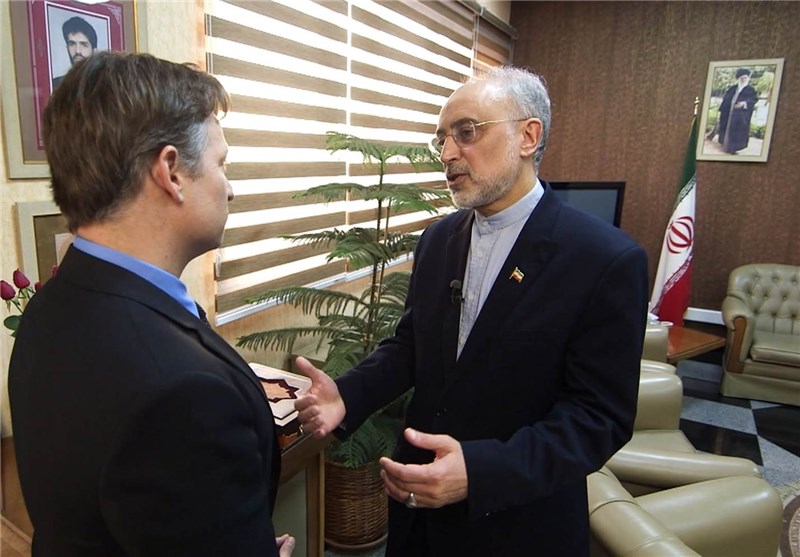 Head of the Atomic Energy Organization of Iran (AEOI) and a senior member of Iran's nuclear negotiating team Ali Akbar Salehi explained how the nuclear deal between Tehran and world powers, whose implementation started on January 16, unfolded from Iran's perspective.

Salehi, who is also one of Iran’s vice presidents, said the Leader of the Islamic Revolution Ayatollah Seyed Ali Khamenei was involved at every step of the way in the secret so-called “second track” with Washington.

“Without the Supreme Leader, we were not able to start the second track. That is for sure,” he said in an exclusive interview with NBC News correspondent in Tehran Richard Engel.

Salehi said Washington initiated the dialogue, indirectly at first, through a businessman from the Arab sultanate of Oman.

The Iranian nuclear chief added, however, that he wanted more than just the word of a middleman before going to the Leader to propose something as important as negotiations with Washington over the nuclear program.

“I said, ‘Look, we have to receive an official letter from the Omanis that would give us the assurance that this is a serious proposal. Otherwise, we cannot just rely on (the) verbal note of a person,'” he said.

“So the Sultan of Oman wrote a letter to our Supreme Leader, expressing the fact that the US is ready to enter into negotiation with Iran on a bilateral basis, or a second track, you may say. And then, I submitted the letter to the leader, and then I discussed the issue with him. And, yes, he said, ‘Okay, I agree that you start this second track. But you have to take four conditions into consideration.'”

Salehi said the Leader’s four conditions limited how far the negotiators were able to go in their talks with Washington.

“One condition was that, ‘Look, you just discuss the nuclear issue. You do not enter into any other issue. I mean, no political negotiations. It’s only nuclear issue negotiation.'”

The second condition, he said, was for the talks to be quick, and not drag on “lethargically.”

“The third condition was that they (Washington) will have to recognize our basic right, which is enrichment. And the fourth condition was a condition that, let’s keep it for ourselves.”

Salehi was Iran’s chief technical nuclear negotiator. His American counterpoint was Energy Secretary Ernest Moniz, who had taught at MIT when Salahi was a student there, though the two men did not know each other at the time, the NBC News reported.

“But later, when we met each other for the first time,” Salahi recalled, they discovered that they had friends in common, “and they had told him about me.” It was, he said, “as if we knew each other.”

“Had it not been the case that me (and) Professor Moniz were in the negotiation, it would have been very difficult for experts to make decisions,” he said.

The negotiations over Iran’s nuclear program culminated with smiling press announcements from Kerry and Zarif in Vienna earlier this month, but this didn’t all happen peacefully. There’s blood on the ground too.

Five photographs are prominently displayed on the wall of Salahi’s Tehran office. The quiet, soft spoken man, who speaks fluent, barely accented English, became emotional when he showed them to us, his voice instantly hardening.

The photographs are of four nuclear scientists and a driver murdered in Tehran in an effort to sabotage Iran’s nuclear program. Salehi blamed Israel for the murders but says Washington shares the responsibility.

“We have all the information that it was the Zionist regime,” he said. “But there is — there was — a tacit, we think, agreement from the United States as well, unfortunately.”

According to NBC, US officials have denied involvement in the killings. Israeli officials have not confirmed the regime’s involvement, but expressed satisfaction that the Iranian nuclear scientists were killed.

Asked if he expected a sixth photograph on his wall, Salehi showed a passion previously hidden behind his relaxed demeanor.

“I hope it’s me. I hope it’s me,” he said. “Because this is a source of pride, I told you. We look for martyrdom. We are not frightened of that.”