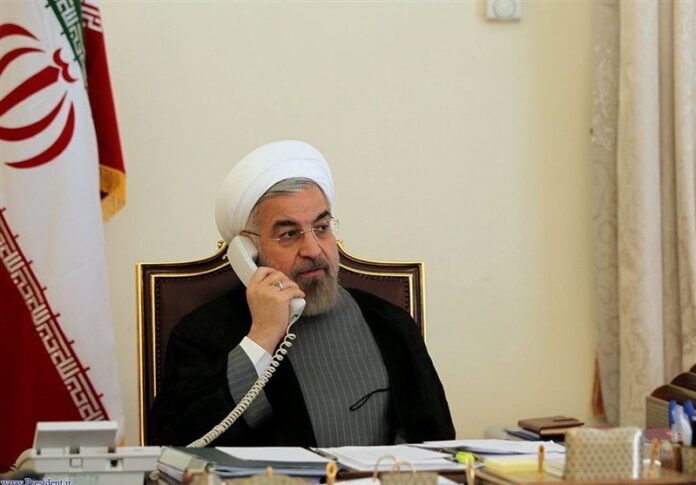 According to the official website of the Iranian president, Rouhani had a telephone conversation with Macron and congratulated him and the French government and people on the New Year and expressed hope to witness closer ties and friendly relations between the two countries in all fields of mutual interest.

As regards Iran’s presence in anti-terror measures in neighboring Iraq and Syria, Rouhani said, “Our presence in Iraq and Syria has been based on the official invitation of the governments of these countries and to fight terrorism.”

The Islamic Republic of Iran’s key policy is based on development of peace and stability and strengthening of stability in the region, he noted.

“Today, it is clear for everybody that Iran’s efforts and help has led to the elimination of Takfiri ISIS terrorists in the region.”

Pointing out that Iran believes that the future of any country is determined only by the will of its people, Rouhani added, “Everyone must work for holding a free election in Iraq.”

Referring to the need to end the siege of people in Syria and Yemen, and to deliver humanitarian aid to the people and the wounded in these areas, the president emphasized the need for continued efforts and negotiation for constructive dialogue and national reconciliation in Syria.

Rouhani also praised establishment of peace in Lebanon and said, “Provocative remarks against Lebanon by the Zionist Regime and violations of territorial sovereignty of the country by them is never acceptable.”

President also called the latest stances of the US President towards Jerusalem (al-Quds) in the current conditions of the region devastating and emphasized the need for Europe to declare a clear stance towards development and strengthening of stability and peace in the region and not coordinating with the United States.

Rouhani stated that the Islamic Republic of Iran is committed to complying with its obligations under regulations and cooperation with the International Atomic Energy Agency (IAEA), adding, “The Joint Comprehensive Plan of Action (JCPOA) is an international agreement in the interest of all, and everyone should work to persevere this agreement.”

“We will adhere to the JCPOA as long as we feel we are enjoying its benefits.”

Today, true democracy is underway in Iran, the example of which is the recent presidential election with the passionate presence of the people, said Rouhani, adding, “Promotion of violence has nothing to do with legitimate freedom, criticism and expressing demands, and no country slacks off the security of its people.”

“We expect the French government to take its legal responsibility to combat terrorism and violence,” said  Rouhani, criticizing that a terrorist group has a base in Paris, operating against the Iranian people and provoking and persuading people to take violent actions in Iran.

French President Emmanuel Macron also pointed out that France was fully committed to implementation of the JCPOA, and believed it to be in the interest of international peace and stability, and stressed the need for continued talks and consultations to promote stability and peace in the region and end the unrest in Yemen, Syria and Iraq.

“The logic calling Iran as the Axis of Evil is the reason for regional tensions,” said Macron, adding, “We need to work harder to develop cooperation and consultation in order to promote and consolidate peace and stability in the region”

“We have never supported terrorist groups and will not allow any action to take place against other countries from France,” he continued.