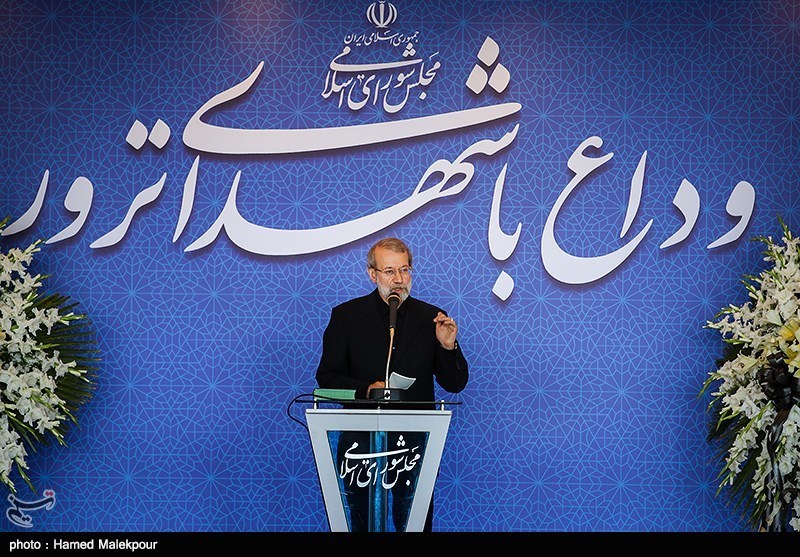 Iran's parliament chief Ali Larijani says the US move to impose new sanctions on Iran following twin terrorist attacks in Tehran proves that the Islamic Republic is facing two ISIS groups, one in the region and one at the international arena which is the US itself.

Larijani slammed Washington for the imposition of new anti-Iran sanctions,, saying that “the US Senate shamelessly approved the bill at a time when the Iranian nation was facing the terrorist incidents”.

He made the comments during a funeral ceremony held for the martyrs killed in the twin terrorist attacks in Tehran on Wednesday.

Addressing the ceremony on Friday, he said, “Today is a tough day for the Iranian nation. Farewell to dear ones, who were sadly martyred.”

Referring to terrorists’ targeting of the mausoleum of Imam Khomeini and also the Parliament, Larijani said, it indicated that they had concentrated on the “axes of the Iranian people’s religious democracy.”

On Wednesday, terrorists launched two simultaneous attacks on Iran’s parliament building and the mausoleum of the founder of the Islamic Republic of Iran, Imam Khomeini, in southern Tehran.

At least 17 people were killed and more than 40 were wounded in the attacks.

The ISIS Takfiri terrorist group claimed responsibility for the assaults.