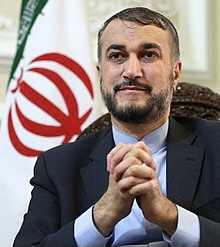 Top Iranian diplomat says his priority as the new foreign minister is to expand ties with neighboring countries. In a message posted on Instagram, Hossein Amir Abdollahian added the ministry under his command will pursue balanced, dynamic and smart foreign relations based on mutual respect. His full message is as follows:

After the honorable President, Ayatollah Raeisi, placed his trust in me, and the respectable MPs endorsed my appointment as Foreign Minister, I assumed the heavy task of representing the great Iranian nation at the international level. I pray to God to help me be a worthy servant for the people of this great and ancient land of religions and civilizations.

I promise the grateful and brave people of Iran that my colleagues and I will utilize our utmost energy to promote Iran’s national interests and national security. We also promise not to hesitate to do whatever it takes to defend the Islamic Republic of Iran’s honor, clout and lofty place and to pursue the lofty goals of late Imam Khomeini, the Supreme Leader and our dear martyrs.

With an operational plan, we will pursue balanced, dynamic and smart foreign relations based on mutual respect and our priority will be relations with neighbors and Asian countries. We will also expand ties with the rest of the world in a balanced way and will strengthen the place of economic diplomacy and international commerce in the Foreign Ministry.

I will also use the full potential of the diplomatic apparatus to resolve the problems of the Iranian people and elevate the name of our country and nation in the world with the help of my hardworking, revolutionary, expert and committed colleagues in the Foreign Ministry,  diplomatic missions, consulates general, and provincial offices.

In the end, I appreciate the efforts of my brother Mr. Dr. Zarif and wish him well and ask our people to pray for me and my colleagues.