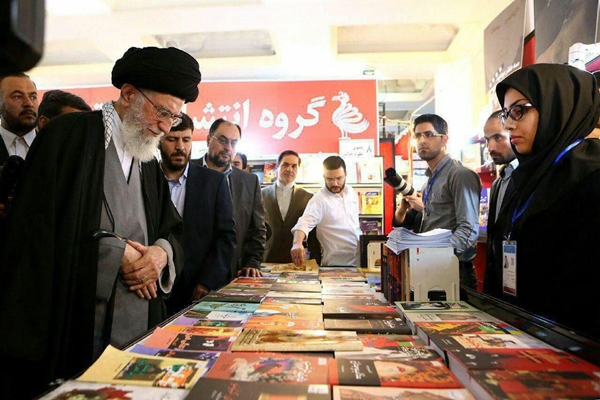 Leader of Iran’s Islamic Revolution Ayatollah Seyyed Ali Khamenei has paid a visit to the 32nd edition of Tehran International Book Fair (TIBF), which is underway in the Great Mosalla of Imam Khomeini.

The Leader was accompanied by Culture Minister Seyyed Abbas Salehi during the visit.

The unannounced visit surprised those attending the book fair, as they didn’t think the Leader would visit pavilions where ordinary people were hanging around, Fars News Agency reported.

“During the visit, the Leader called for further promotion of [publishing] books and reading culture,” a deputy head of the exhibition said.

Ayatollah Khamenei also urged further support for books that promote beliefs and values of the Iranian nation, are closer to the culture of revolution, and focus on Iranian-Islamic identity, the official added.

The 32nd edition of Tehran International Book Fair kicked on Tuesday with the motto of “Reading Is Ability”.

“With this motto, we welcome not only the great cultural event of our country, but also one of the largest cultural events in the world,” said Mohsen Javadi, the head of this year’s exhibition.

In addition to 2,400 domestic publishers, 800 international publishers offer their valuable works at this edition to book enthusiasts.

Last year 1,400 titles were published and put on show at the exhibition, he noted, adding that cultural events and discussion sessions about the books are being held at the venue of the fair.

“The history of Iran is known via the great books of scientists and wise men. We are glad we can develop friendship among nations and governments by books,” the official maintained.

China is the special guest of the exhibition this year. China’s news conference was held Monday (April 22) with the presence of Iranian and Chinese officials.