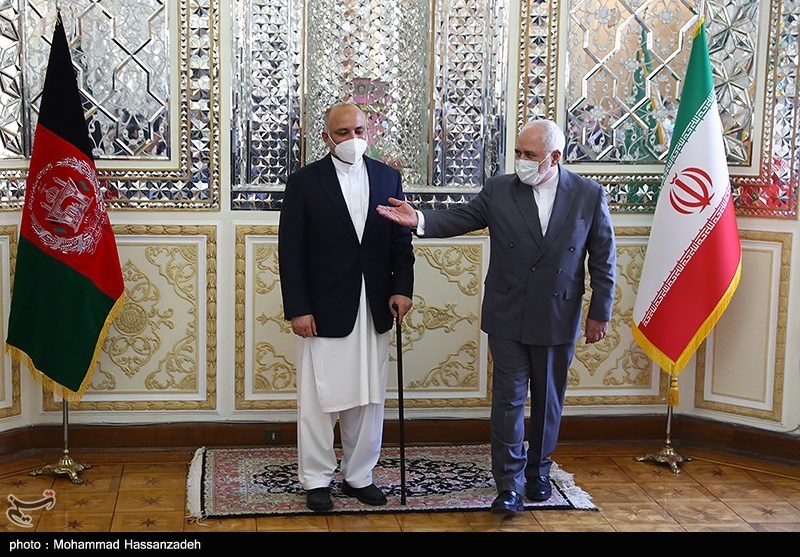 Iran’s Foreign Minister Mohammad Javad Zarif has expressed sorrow over the recent incident for Afghan nationals near the border with Iran, saying that human traffickers must be blamed for the tragic events as there is not enough monitoring at the borders.

Zarif on Sunday referred to the recent media hype and the moves made by some foreign actors and political currents inside Afghanistan, who took advantage of the recent tragic events for Afghan nationals, saying they were attempts to undermine close cooperation and fraternal atmosphere between the two countries.

He said Afghanistan’s evacuation of its border checkpoints has shift all the responsibilities to Iranian border guards, and this has led to such incidents.

The Iranian top diplomat made the remarks in a meeting with the caretaker of the Afghan Foreign Ministry Mohammad Haneef Atmar in Tehran.

He expressed hope that the Afghan government would take more care to prevent the destructive activities of the ill-wishers who seek to disrupt the two countries’ relations.

Zarif further referred to the support of the Iranian people and government for the Afghans during the years of war despite the problems and shortcomings caused by foreign sanctions against the Iranian people, saying that Iran has hosted more than three million Afghans over the past 40 years.

Zarif cited the recent order of Iran’s President to provide free treatment to Afghan citizens infected with coronavirus in hospitals across Iran as another example of this cooperation with the Afghan government and people.

He further offered congratulations on the recent political agreement between Ashraf Ghani and Abdullah Abdullah and expressed satisfaction that the Islamic Republic of Iran has been able to play a positive role in this regard at the request of the Afghan parties.

He stated that the Islamic Republic of Iran is committed to continuing its regional and international efforts to reach a consensus in support of the Afghan government’s focus on inter-Afghan dialogue and the protection of the Constitution, the republic political system, and the observance of constitutional rights.

For his part, Hanif Atmar appreciated the continuous support of the Islamic Republic of Iran for the people of Afghanistan over the past four decades, and highlighted the presence of representatives from all sections of the Afghan government in the delegation accompanying him.

He said the goal of the delegation’s visit to Iran is to try to allay the concerns and solve the problems and to prepare the ground for the development and promotion of relations.

Atmar also called for continuation of this cooperation and the constructive role played by the Islamic Republic of Iran to advance the peace process in Afghanistan.

During the Sunday meeting, the two sides stressed the need for more effective monitoring of the common border and agreed to work together to improve the level and quality of border care in order to ensure that the recent bitter incidents would not occur again at the borders.

Also, in view of the agreements reached to provide the legal presence of Afghan citizens and their access to the Iranian labour market in the framework of negotiations for the preparation of a comprehensive document on strategic cooperation between the two countries, the two sides expressed their determination to finalise the document and prepare the ground for the two presidents to sign the document as soon as possible.

The two parties agreed to prepare the text of the final agreement to be signed by the presidents within the next three months.

During the meeting, the two top diplomats also talked about the ISIS’ threat for regional security, stressing the need for bilateral cooperation in the fight against this terrorist group.

Hanif Atmar and the accompanying delegation will meet with the Ministers of Interior, Labour and Energy during their two-day stay in Tehran.

Atmar arrived in Tehran before noon on Sunday at the head of a high-level delegation consisting of 45 high-ranking Afghan government officials.

Upon arrival, Atmar and the accompanying delegation met with Iran’s foreign minister and a group of senior officials and attended a formal luncheon hosted by Mohammad Javad Zarif.

During the meeting, the two sides discussed various issues of bilateral relations and regional and global affairs, and emphasised their willingness to expand and strengthen bilateral relations in light of extensive ties and friendship between the two nations.