Iranian public and private bodies and organizations have been rushing to reward Kimia Alizadeh, the young Iranian taekwondo player who won the first-ever Olympic medal for Iran, upon her arrival in Iran.

Although Alizadeh had won a Bronze medal, the Iranian Ministry of Sports and Youth Affairs vowed to give her 300 gold coins, almost $94,000, which is the same reward it gives to gold medallists. 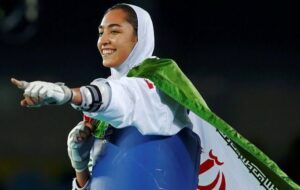 Also upon her arrival in Karaj, her hometown near the capital city of Tehran, the Governor-General of Alborz Province gave her an apartment as a reward for the historic medal she won.

The City Council further rewarded her with $14,000 in cash in a ceremony held in Karaj, according to a report by Asr-e Iran.

She also received an Iranian-made car from a sponsor, which is reported to be worth $10,000.

Earlier, President Hassan Rouhani had hailed Alizadeh as a young lady who became the symbol of the presence of Iranian women in the games.

The 18-year-old athlete made Iranian history after she won an Olympic bronze medal in the -57kg class of taekwondo competitions.