Iran’s efforts to protect Asiatic cheetah have paid off 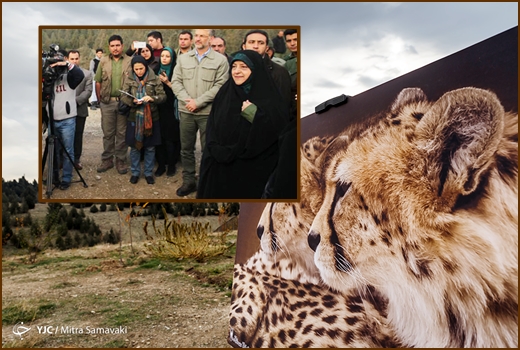 The environment chief has said that her organization has taken measures to raise people’s awareness of their responsibility toward the Iranian cheetah and help them understand the real value of these feline species.

The director of the Environment Protection Organization has said that Iran has successfully carried out the cheetah protection plan, citing the capture by camera traps of images of 18 cheetah cubs in wildlife habitats across the nation this year.

Masoumeh Ebtekar made the comment in a ceremony to mark International Cheetah Day (December 4) and added that cheetah is viewed as a national, regional and international symbol. Ettela’at newspaper on December 7 published a report on the ceremony and remarks by the environment chief and the United Nations resident coordinator in Iran. The following is the translation of part of that report:

Masoumeh Ebtekar said that Asiatic cheetah has become extinct in Asia, and only a small number of the fleet-footed big cats live in Iran’s wildlife habitats.

As for Delbar and Kooshki, two female and male cheetahs in captivity, she said that their living place is monitored by camera trapping, adding that Iran has consulted international feline experts to be able to prepare the ground for the two big cats [to live a natural life and produce offspring].

Ebtekar further said that with the stage set, the country can take important steps in helping cheetahs in captivity reproduce.

The study of cheetahs’ behavior, as well as their physiological and biological conditions helps us collect key scientific information which could be useful for experts and animal lovers all over the world, she added.

The environment chief blamed cheetah fatality rate on poaching, human-wildlife conflict and road accidents and said that the Environment Protection Organization has taken various measures to raise public awareness, especially in local communities and among villagers and livestock farmers, and help people appreciate the real value of these felines.

Ebtekar went on to say that she cannot give an exact figure about the population of cheetahs, adding that conducting a cheetah census is a difficult job. She said that imaging provided by camera traps shows that the cats are reproducing, citing the sighting of as many as 18 cubs in the wildlife habitat.

She also said that cheetahs are likely to produce more cubs in the habitats where they are exposed to lower risks, adding that stricter, preventive penalties are being imposed on offenders who harm or cause damage to the animal species. Ebtekar said that her organization has established good interaction with the Judiciary so that the latter can seriously deal with environmental offenders.

At the same ceremony, UNDP Resident Representative and United Nations Resident Coordinator in Iran Gary Lewis said that the UN has worked with Iran for the past 12 years on an Asiatic Cheetah protection plan, adding that camera traps have been installed in protected areas and the locals have been trained to help protect the [critically endangered] Iranian cheetah.

He praised the role rangers play in protecting the big cat’s wildlife habitat and said that we have managed to reverse the extinction of the Asiatic cheetah over the past years.

Lewis further said that the United Nations has dedicated around $2 million to the Cheetah protection project in ten years, adding that the world body will definitely forge ahead with its cooperation with the Environment Protection Organization in the future to help protect the Asiatic cheetah in Iran.