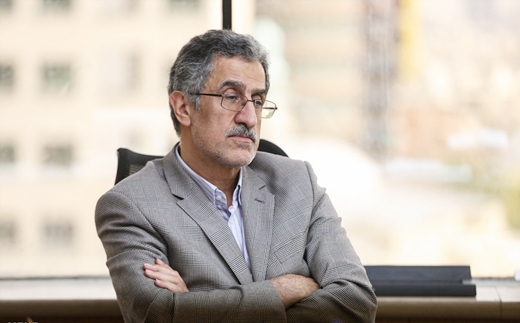 The head of Tehran Chamber of Commerce warns of a new class of rich people who were born under the previous government, saying they can become the bane of Iran’s economy.

Masoud Khansari is the fifth chairman of Tehran Chamber of Commerce, Industries, and Mines (TCCIM). He’s been active in the public sector for over two decades, but he stresses the need for the national economy to depend on the private sector. That’s why, he says, he has joined the chamber of commerce to take more effective steps toward beefing up the private sector.

He has taken the helm of a chamber which has undergone change and brought together a mix of young people with different specialties. In this chamber, old tradesmen – who had made their way from the heart of traditional bazaar into the private sector – have been replaced by young businessmen, industrialists and technocrats.

Khansari is a supporter of interaction with the world, saying the country’s interests will be better served when it is unshackled from economic sanctions after the conclusion of the Iran nuclear deal. He says that the consequences of mismanagement in the ninth and eleventh governments (led by Ahmadinejad) have been by far more harmful than those of sanctions.

The TCCIM chief also says that the rational management of economy and removal of sanctions are the two positive developments which can herald a boom in Iran’s economy. Nonetheless he is concerned about market disruption by a new stratum of the rich who came to being during Ahmadinejad’s presidency, and about provocations coming from the outside – including Saudi Arabia and the Israeli regime which are opposed to the nuclear deal. He warns that these two inside and outside factors should not be downplayed.

Etemaad daily on August 15 published an interview with Khansari on the Iranian market which, he says, remains concerned about the emergence of a class of businessmen with ties to Ahmadinejad and his inner circle. The following is the translation of part of the interview:

The enthusiasm of foreigners for being present in Iranian market is understandable, but what matters more is how we want to cooperate with them. The Iranian market is not a small one limited to the country’s population of 78 million. We need to take into account the neighboring countries’ markets as well and work out plans for a 280-million-strong market. […] The foreigners are seeking to export goods to and invest in Iran, but we should see how we can make the optimal use [of their presence].

The foreign exchange prices should be reasonable in the first place; otherwise a grave danger would lurk out there for Iran. Unreasonable forex rates will repeat the bad thing that happened under the previous government and destroyed the country’s industries and production. Thanks to reasonable prices, Iran’s industries can show their potential and the country can pin its hopes on the new era.

The foreigners are interested in making investment in oil and petrochemical industries and car manufacturing – Iran’s market has the potential to sell 1.8 million cars each year – as well as in electricity and pharmaceuticals.

The private sector is the driving force behind the national economy.

If the country’s privatization drive is expected to go ahead smoothly, we need to find people who seek to give priority to development.

Foreign delegations and termination of sanctions

I think they [foreign delegations] have long been after the termination of sanctions. In my meetings with European ambassadors, I learned that they were unhappy with the sanctions. They were afraid of the US, because it was their largest trading partner and the penalties they had to pay for having transactions with Iran were hefty.

Naturally, they like to have a share of the 280-million-strong market. Since oil accounts for the better part of Iran’s revenues, we do not appreciate the real value of nickel-and-dime profit. It is not the case for the Europeans to whom these markets are a matter of life and death. That’s why they are trying to normalize the situation.

It is a bit tougher for the Americans. The Europeans and Asians have always been [active] in Iran and have a correct interpretation of the situation on the ground. For the past 36 years, Iran has had no contacts with the US. Unlike Iran’s European and Asian partners, the Americans do not have a full understanding of the situation in Iran. I think the US faces more restrictions for investment in Iran than other countries.

It is important to know about your economic partner. For 36 long years, ties between Iran and the US have been strained. In the automotive industry, for instance, the French, Japanese and Koreans have been active in Iran [in the past 36 years] and know the ropes. They know about Iran’s technologies, managers and factories. The Europeans were involved in pharmaceuticals and petrochemicals, so they know their trading partners, but the Americans know nothing about Iran.

From an international angle, the Iran nuclear deal can be as important as the ceasefire agreement between Iran and Iraq [back in 1988]. From a domestic angle, I think a landmark event preceded the nuclear deal between Iran and P5+1 and that was the rise to power of the eleventh government – the ill-effects of the ninth and tenth governments’ mismanagements outweigh the impacts of sanctions and their ensuing events. In fact, sanctions could not have affected Iran’s economy so adversely had it not been for the mismanagements of the previous government.

An end to an international dispute

[…] The world thought it could knock down Iran by using sanctions as a tool; to their disbelief, Iran stood on its own two feet despite suffering from mismanagement. […] If international interactions improve, a new era will definitely be ushered in for Iran which has a high oil capacity. Economically, Iran is stable. When the doors open, more change [for the better] will unfold.

What matters more today is the security situation. The region is unsafe, but, luckily, Iran is completely safe. The world has accepted this. Iran is in a good condition as far as infrastructure for production and industries is concerned. The world has learned a lesson from the fallout of undiplomatic measures. The US experience in Iraq led to [the emergence of] ISIL. The world needs to get along with Iran if it wants to restore security in the region.

Iran has always been a regional heavyweight. In recent years, the Arabs and the Zionist regime have been able to play a bigger role thanks to divisions between Iran and the West. Things will change after the deal. […] Saudi Arabia and Israel have domestic problems which will be heightened by the Iran deal. Iran is a powerful country today and has to bolster its might as it tries to establish good relations with its neighbors so that they do not see Iran as a headache.

Iran, which is entering a new era, has been left with a bitter legacy. I’m very much concerned about a new stratum which was formed during the Ahmadinejad presidency; those who emerged out of nowhere, got rich overnight and consolidated their financial foothold by building on rent-seeking and proximity to the corridors of power. They will create problems in the future, because the financial resources they have at their disposal – thanks to corruption – will make them powerful. We need to beware of this class of people so that they cannot make the situation tense.

A group of people in their twenties or thirties – with no economic background – have been given a windfall and are now leading a special [affluent] life. The lifestyle of a young man like Babak Zanjani is more lavish than the old industrialists and veteran economic players. They can be troublesome, because the money they have collected overnight can be spent on dangerous things.

It depends on our efforts. We are trying to increase the members or the number of people holding business cards. We need to bring on board more people in the chamber. We also need to raise the number of specialty organizations, keep pace with global changes and put forward new subjects such as management and technologies. In addition to the sanctions, we have been out of touch with managerial techniques. We should bring the new generation into the scene. We are doing our utmost to represent the majority of the private sector. […]