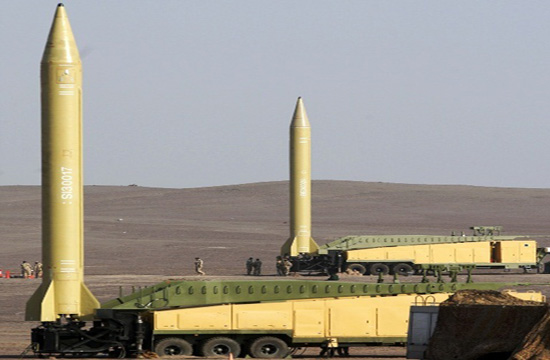 Iran’s ambassador to the United Nations has rejected any negotiation over the Islamic Republic’s “legitimate” ballistic missile program.

“On numerous occasions, we have made our position on the country’s defence capabilities completely clear,” he noted.

“Under the international law, every country is essentially entitled to develop a conventional missile program, and Iran is not exception,” said the official.

“Hence, Iran will not negotiate on its legitimate ballistic missile program,” he underlined.

He said Iran pays due regard to its national security.

“As Iran is located in a sensitive region such as the Middle East, we will not allow our security and conventional defence might to be compromised, restricted or undermined,” he said.

“Iran won’t be intimidated into abandoning its legitimate defence tolls by the bullying policies of certain powers,” said Takht Ravanchi.

He said the only source of instability and insecurity in the region is the presence of a large number of American troops in almost all countries neighbouring Iran and the ones in the Persian Gulf and the Sea of Oman region.

Another source of instability and insecurity, he said, is the flow into the region of the most sophisticated weapons made by the US and other Western countries.

“The Persian Gulf has been suffering from foreign interference and unfair rivalries for years. Due to the unrestrained inflow of dangerous Western weapons, this region has turned into a powder keg. In order to sell more arms, these countries fuel differences in the region and have adopted the ‘divide and rule’ policy,” he said.

He expressed hope countries in the region will soon welcome Iran’s peace initiative known as the Hormuz Peace Endeavour (HOPE).

Any Talk of Renegotiating JCPOA Unacceptable

He further noted the 2015 nuclear agreement, officially known as the JCPOA, was the outcome of marathon talks and there is no point putting it on the negotiating table again.

Takht Ravanchi said that under UN Security Council Resolution 2231, the JCPOA was concluded as a comprehensive, long-term and appropriate solution to the Iran nuclear issue in order to establish a new relationship with Iran and facilitate and boost trade and economic cooperation and transactions with Tehran.

“The conclusion of the JCPOA was the result of marathon talks, including difficult tit-for-tat arrangements, and any offer of revising, renegotiating or extending the deal runs counter to UNSC Resolution 2231, and will definitely be not acceptable for Iran,” the top official added.

“After withdrawing from the JCPOA on May 8, 2018, the US re-imposed all of its nuclear sanctions, and ever since, has adopted a hostile approach toward the JCPOA and Iran, covertly and overtly bothering Iran’s trade partners constantly and extensively,” he added.

“With these measures, the US has committed blatant violations of the JCPOA and has systematically and constantly breached its legal obligations under UN Security Council Resolution 2231, the UN Charter and the international law,” he explained.

“Moreover, by impudently threatening to punish other governments if they refuse to violate Resolution 2231, the US has both reneged on its commitments under that resolution and practically prevented other state parties from living up to their obligations,” he said.

Takht Ravanchi also touched upon Washington’s breach of a ruling by the International Court of Justice (ICJ).

“The United States has also refused to abide by a quia timet injunction issued by the unanimous vote of judges of the International Court of Justice on October 3, 2018 which obliges the US to remove impediments to the sales of humanitarian supplies to Iran,” he said.

“Still, instead of adopting remedial measures authorized under the JCPOA, Iran exercised maximum restraint and strategic patience for one year at the request of the three European countries,” he said.

However, he explained, Iran’s restraint was met with the United States’ so-called “maximum-pressure” policy and ever-increasing illegal sanctions as well as the three European countries’ absolute failure to deliver on their commitments.

“Under such circumstances, we had no choice but to take remedial steps in full compliance with paragraphs 26 and 36 of the JCPOA which stipulate that Iran has every right to stop the implementation of its commitments, in whole or in part, if new sanctions are slapped on the country or if previous sanctions are re-imposed,” he said.

“So, Iran’s measures are in full compliance with our rights and obligations under the JCPOA, and more importantly, they are reversible,” said the top official.

“It must have become clear by now that the policy of intimidating and pressuring Iran has been, and will be a non-starter.”

He said Iran will return to its obligations under the JCPOA only if the other signatories begin fulfilling their commitments under the deal unconditionally, effectively and fully.

US Imposed Over 1,500 Sanctions on Iran in 4 Years

Takht Ravanchi underscored that the United States has slapped more than 1,500 sanctions on Iran targeting all of the country’s economic sectors and destroying almost all benefits of the JCPOA for Iran.

“Such sanctions, which are expected to increase even until the last minutes the current US administration is in office, amounts to a full-scale war where weapons have been replaced by an economic tool.

“Based on US officials’ comments, the sanctions are aimed at starving Iranian people using food and medicines as a weapon, a practice which is even forbidden during wartime,” said Takht Ravanchi.

He said Washington’s claim that sanctions do not include humanitarian supplies is a “sheer lie.”

He noted Iran is unable to import vital drugs and medical equipment for patients at a time when Iran, like the rest of the world, is gripped by the coronavirus pandemic.

“Sanctions do not only result in economic hardship; rather, in many cases, they cause the deaths of innocent people in society from different walks of life,” said the official.

“By any standard, the United States’ sanctions are illegal, illegitimate, immoral, inhuman and cruel, and can be aptly named ‘economic terrorism and crime against humanity’,” said the official.

“Moreover, sanctions are only part of the United States’ bullying and destructive behaviour and policies toward my country, including systematic Iranophobia, bellicosity, military adventurism in the Persian Gulf, interference in Iran’s internal affairs and many other illegal and provocative acts,” he added.

“A clear example of this failed policy is the brutal assassination of [Lieutenant General] Qassem Soleimani around a year ago. This terrorist act which was committed on direct orders by the US president amounts to flagrant violation of international law,” he said.

“There are also new clues suggesting the assassination of top Iranian scientist Mohsen Fakhrizadeh on November 27, 2020 was the handiwork of the United States’ closest ally in the region, i.e., the Israeli regime, which has a long and dark record of committing such acts of terror against Iranian nuclear scientist in the past,” he said.