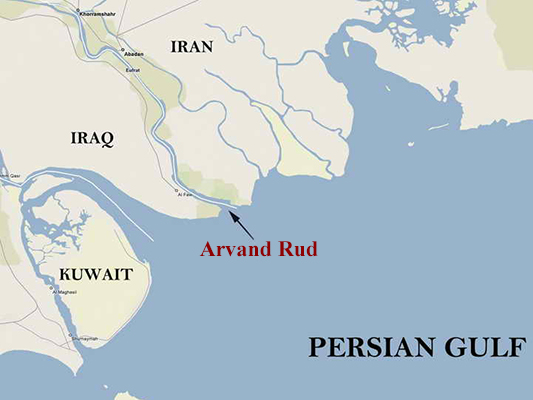 Iraq’s ongoing negotiations with Iran over the Arvand Rud, the river that serves as part of the natural border between the two states, are particularly significant as the river plays a key role in the Arab country’s territorial integrity.

Iraq’s efforts to hold talks and settle its border disputes with Iran and to facilitate its access to the Persian Gulf not only show Baghdad’s close relationship with Tehran, but are regarded as an initiative to increase the costs of attempts by separatists in Iraq’s Kurdistan Region.

The new round of meetings of the Iran-Iraq Joint Legal-Technical Committee was held in Baghdad on Sunday, July 23, with top officials and relevant experts from both countries in attendance. The meetings are co-chaired by Iranian Deputy Foreign Minister for Arab and African Affairs Hossein Jaberi Ansari and Iraqi Deputy Foreign Minister Nizar Khairallah, and will continue until Monday. Delegations from both countries comprising political, legal, military, surveying, and ports and shipping experts are present at the talks.

The negotiations are held on a rotating basis in Tehran and Baghdad. On the agenda is the latest situation of the Arvad Rud (known as Shatt al-Arab by Arabs), the river which lies on the two countries’ common border. Ways of boosting cooperation in order to utilize the waterway to boost economic growth in both countries is also a topic of discussion.

The fresh round of border talks between Iran and Iraq is being held in the wake of the ISIS terrorist group’s defeat amid reports that there are certain elements seeking to hold a referendum for independence of the Iraqi Kurdistan region. This shows the Iraqi central government is determined to safeguard its territorial integrity and is trying to improve its economic situation by easing access to the Persian Gulf waters.

Iraq is not capable of efficiently utilizing its oil reserves because it is a land-locked country and has very limited access to the Persian Gulf. This has triggered border disputes between Iran and Iraq. After all, before Baghdad launched its eight-year war on Iran in the 1980s, former Iraqi strongman Saddam Hussein tore up the 1975 Algiers Accord between the two countries and tried to occupy Arvand Rud’s bank on Iranian soil.

However, the situation is different now. The Iranian and Iraqi governments have very close and cordial relations and, by the admission of Iraqi officials and people, Iran was the only country to stand by Iraqis (including Arabs, Kurds, Shiites and Sunnis) to help rid the nation of ISIS terrorists. Now after the defeat of terrorists, there are fears that the sweet taste of victory over ISIS might be soured by threats to Iraq’s territorial integrity. Under such circumstances, the Iraqi government seeks to take advantage of its friendly relations with Iran and, through dialogue and diplomacy, draw Iran’s cooperation to help stabilize its territorial integrity. Joint efforts to revive and dredge Arvand Rud will not only give fresh impetus to the transportation of cargo and passengers, but can also facilitate access to the Persian Gulf and to get Iraq connected to the high seas, a great advantage that would make the horizon ahead of Iraq brighter.

In addition to having positive economic effects, and at a time when the hostile policies of the Israeli regime and other enemies of Iraq are targeting the country’s territorial integrity, the beginning of expert talks in order to settle a historic border dispute based on international relations amounts to the consolidation of friendship and strategic alliance between Iran and Iraq. It seems negotiations between Tehran and Baghdad at this juncture in order to revive the geopolitical role of Arvand Rud is a clear and strong message to all by the Iraqi central government. The message is that Baghdad will not succumb to efforts by some elements to separate Kurdistan from Iraq, and that Kurdistan’s separation from Iraq will jeopardize Kurds’ medium-term and long-term interests as well.

If Iraq’s access to the Persian Gulf is facilitated, that will definitely make the situation more difficult for local elements and foreign governments that urge Iraqi Kurds to separate from Iraq. The establishment of a landlocked country under the pretext of seceding from a country with access to the high seas is irrational enough for Iraqi Kurds to rethink their calls for separation.