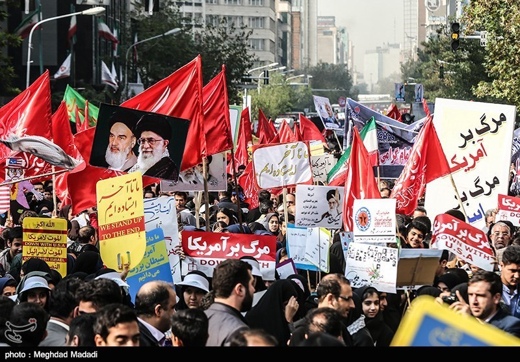 In Iran, November 4 marks Student Day and National Day of the Fight against Global Arrogance.

Iranians have held massive rallies across the country to mark the 36th anniversary of the 1979 takeover of the US embassy in Tehran.

Demonstrators gather outside the premises of the former US embassy, also known as the “Den of Espionage,” in Tehran every year and chant slogans against the US. People in other cities across the country also take to the streets to mark Student Day as well as National Day of the Fight against Global Arrogance.

Thirty six years ago on this day, a group of Iranian university students took over the US embassy, which they believed had turned into a center of espionage aimed at overthrowing the Islamic Republic following the country’s Islamic Revolution earlier in 1979.

Documents found at the compound later corroborated claims by revolutionary students that the US was using its Tehran embassy to hatch plots and overthrow the nascent Islamic establishment in Iran.

Founder of the Islamic Republic Ayatollah Khomeini later hailed the event as “a second revolution” with a greater significance than the original revolution of the Iranian nation.